Sahara is one of the largest deserts in our planet, and was formed some 7 million years ago following the drying of a sea called Tethys due to tectonic activity.

When I think of Morocco, I think of the gate to the hot Sahara desert, the beginning point of thousands of stories of nomads, migrating families, struggling empires and lost souls, human stories after all. Stories where survival or honor lead people deep into the Great Desert: vast, barren and unwelcoming.

Despite being in the country for just a few days, I knew I had to make room for an excursion into the Sun-beaten land of dunes. If only to breathe the same landscape those true adventurers before my time did. If you are in a bit of a hurry like me, the simplest way to do so is via the village of Merzouga, one of many “gates” to the Sahara.

Past Merzouga to the south, the road dramatically ends beneath the dunes. If your car is not a Morocco-borne four-wheel (or you’re just short on money as I was), you can hire a camel to tour the desert for a few kilometers.

In Merzouga, a friend put me in contact with Moha from the See Around Morocco tour agency. Beyond a man of business, he made sure all of us had everything we needed sorted before, during and after our 1 day/1 night tour in the desert.

Moha lives in a humble house close to his camels in Hassi Labied, a tiny village next to Merzouga. We met a couple of Australians on the way, so we ended up being a group of 9 travelers. Nine camels were already prepared for us to ride.

I am always unsure about activities that involve animals, and try to avoid them in my travels. Despite not being used for obvious bloody entertainment as in the case of bullfighting, these animals are still being used for the sole purpose of pleasing travelers and filling Instagram feeds.

However, sometimes I am just human and succumbed to social pressure and decided to go on with the camel-riding.

If you are concerned about these activities, there are animal-rights organizations that offer pertinent guidelines. For example, SPANA (an international working animal charity) published this guide that gives a few tips on minimizing the damage on the animal.

I recall the beasts were well cared by our guides, but the vision of them having their hind legs tied (so that they don’t run away at night) horrifies me. Definitely not going to ever do it again.

Our destination was a berber-style camp set up on a valley between a few dunes. Moha and his partner prepared delicious tajine dishes, and livened up the place with folk songs.

We sat down atop of the dunes for a beautiful sunset, and repeated for an even more beautiful sunrise. Sometimes we chatted and laughed, and sometimes we sat in silence, absorbing the vastness in all its hues of orange.

The air of the night was fresh (mid-June 2017), so we took out the mattresses from the tents and bivouacked outside. 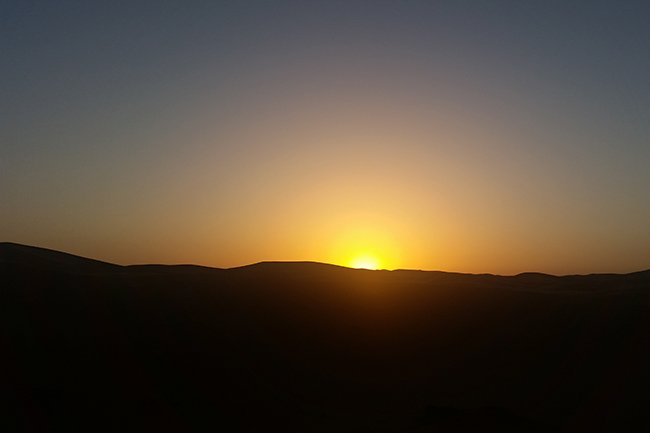 A little highlight of our excursion was sandboarding. We did not bring any special gear for that, but it turns out one can safely surf barefoot.

There really isn’t much room for danger because the dunes are hardly as steep as the easiest snow slopes, but the sand can be hard. We started off surfing the lowest dunes in straight lines, and moved on to (trying to) turn and jump a bit.

We kept at it until the Sun was way below the horizon and each one of us had already hit the ground hard too many times.

Finally, we complemented our time in and around Merzouga with a refreshing dip into the pool of Riad Madu for 50 MAD (~5€). There are a bunch of other hotels and riads with crazy-looking pools with views to the desert that allow travelers to rest for a bit without staying the night!

How to get there: Supra Tours bus from Fez or Marrakech; renting a car or hitchhiking also recommended. Unlike other touristic areas of Morocco, there did not seem to be other bus companies operating in Merzouga at the time, only Supra.

One Reply to “A night in the Sahara desert in Morocco”