Bagan is shutting down its temples, an ongoing process that began on January 2018 in order to protect them. Authorities are locking the ones with roofs and guarding with police the ones that were usually climbed from the outside.

Make sure to check the most recent comments by fellow travellers at the end of this article for the latest tips on where to see the best sunrises!

For info on how to get there, accommodation and places to sleep, check out this quick travel guide to Bagan.

Finding the perfect sunrise/sunset spot has become trickier, and a lot of information on travel blogs and maps applications is suddenly obsolete.

I am periodically updating this article with information about places across the Bagan plains that have good views and are still accessible, mostly from travelers who provide updates from their trips (check their comments for some extra info!). Thank you so much for sharing your tips!

Why are the temples being shut?

Basically, having tens of travellers climb old temples does them no good. Shutting them is the way to protect them and help their preservation.

Although many of the temples were restored in the 1990s, some others are centuries old.

Some temples have been recently rehabilitated to safely allow visitors on their terraces. Those are the places that travellers should go for ideally, instead of climbing temples illegally.

Also, climbing temples is dangerous. I personally witnessed a young traveller trying to climb an old temple and falling down on his back when a big block of bricks gave in to the weight (and felt on him).

Another opinion shared by some locals is that authorities want Bagan to be a destination for luxury travel only, and by preventing access to temples and castles they will keep backpackers away.

Finally, a seller told me that this was done to redistribute the flow of tourists; that the government plans to keep opening and closing different temples throughout the place every now and then. I am not sure about the logic behind this.

The free phone app maps.me is an absolute must in Bagan. It is the best “map of Bagan” you will find, because previous travellers have shared info about their findings on it.

Temples with rehabilitated terraces and other spots that are still accessible:

As of now, they tend to be packed with tour-package travellers who arrive in dozens, but it seems like a great alternative to further discourage travellers from climbing temples.

Previously, tourists did not pay any attention to locals who offer to take you to a good spot for some pocket money. Since pretty much everything was accessible, most travellers ignored them. Now, with the temples closing down, it might be a good idea to trust them; they are probably a more reliable source than travel blogs now that only a few places are left open.

Regarding the Bagan Viewing Tower, it’s still a very deserted place, rather far away from the rest of the temples, though it’s the highest point in the area. It is accessible for sunrise and sunsets (5AM to 7AM). It is inevitably becoming more and more popular due to tourists giving up on the temples that are being closed. As of February 2019, the entrance fee is 8000 MMK/5 USD. You can see the whole Bagan from the tower, and it’s safe for you and for the temples. 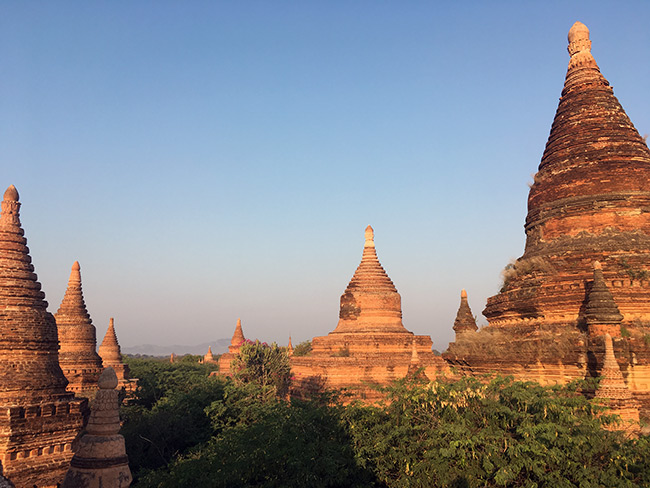 It is 2018 and smartphones have been around for long, so don’t expect any temples you can find along the paths in Bagan to be out of the government’s radar. If you wish to find untouched temples and undiscovered sunrise views, you literally need to get off your bike and get away from the (beaten) tracks.

However, if you only wish to visit around temples from the outisde, most of those south of Anawratha Road are empty and quiet during the day. Outside of sunrise/sunrise hours, you will only pass by a few other foreign travellers on most dusty roads throughout.

Once popular spots that are now closed to the public

These were frequented by locals and travellers, and therefore appear on Maps.me as sunrise/sunset spots, but cannot be accessed anymore. Sometimes, they are temporarily reopened, as reported by some readers. These are:

If you want to know how to get to Bagan, and where to sleep and eat, check out this quick travel guide.

You can read here about my experience in Bagan, where I visited popular and lesser-known temples and monasteries for a few days, and witnessed incredibly beautiful sunsets and sunrises.

Want to share your experience in Bagan or recommend a spot? Write in the comments section below!