I knew about the Japanese bullet trains before coming here, but nobody warned me about their high-speed passenger ships. The ferry was racing the stormy waves at some hundred knots, pitching up and down while constantly rolling more than fifteen degrees an knocking yaws of another ten degrees at the same time. And a bunch of humpbacks were racing along, making giant leaps and fighting the mighty whale sharks. Just kidding; wrong season for whales down here. Still, though, it’s whales’ domain here in high seas, so if you are sailing in a running ship, it is very hard to take your eyes off the moving water, specially if you have seen them before, and know that they are as big as real. Focused as I was on this, time ran away and we landed in another island in no time. The hundreds of passengers below deck were indifferent to this frenzy, and just wanted to reach the archipelago as soon as possible, go rent their full-body sunburn-preventing snorkeling dresses and massively take over the tropical beaches. But if one gets away from these to make for the untrodden paths around the islands, one can easily find her/his own personal beach, and spend the day completely alone in that paradise, and play Crusoe or Jack and Kate when the tropical storms hit again, the fog engulfs you and you start feeling the urge to find a hatch, push the numbers and stop the strong electromagnetic energy from crashing any planes. I was a big fan of Lost, and there might be one too many references to it in this post. These are the kind of places I dreamed of when I first discovered Google Earth and spent hours exploring every tiny island and atoll in the Pacific; this is as close to those as I have been able to get so far. It is 2015 in here too, though, so every island has its modern port and its village and its largely unused roads. The small towns still have that 1970s Japan countryside vibe, with the nicest people in the planet and tanned island kids who rule the streets, fields and hills; albeit with the upgrade of the quintessential vending machines. There are no billboards, no traffic lights and no lights at night. Instead, only small houses, tsunami hazard warnings and a couple of izakayas where everybody knows everybody. When the sun goes down at seven in the afternoon, the towns becomes that ultimate fresh, warm and somewhat windy place that smells like ocean, and only the cicadas break the silence. All in all, an incredibly cool lifestyle, and an equally incredibly traveling paradise; swimming with giant turtles, fish and corals of all sizes and colors, hitchhiking with families of all sizes and colors, and worrying only about the rising of the tide in case you were hopping remote islets with crazy views in the morning.

Let’s start from the remote parts of the islands, and slowly return to the cozy towns of Zamami and Tokashiki, before departing for Naha.

Let’s start with me. This is me running around the first of many remote and completely desolated beaches and spots of Zamami. After convincing myself that there would be no polar bears, Dharma scientists and crazy French women, I decided to take a book with me, just in case paradise was frustratingly boring. But in the end all I did was run from end to end through the lengths of the beaches, swim with impossibly colorful fishes and contemplate the beauty of it all from the sands. It was all magnificent, for “I walked briskly on the sand. The tide was low and there was a strip of weed-strewn beach that was almost as firm as a road. A kind of glamour was spread over me and the scene and I was conscious of the glamour and made happy by it. I turned to myself, laughing excitedly, talking, not listening. The air was bright. I, faced by the task of translating all this into an explanation, stood on my head and fell over.”

Following the roads and paths and tracks away from the port, I lost count on how many otherworldly sights flashed by, seldom remembering to take out my phone and immortalize the view to convince people that this is real, that the Pacific is real, that life out there is happening while your time flies on the way from Starbucks to the office and from the office to the gym, counting your likes instead of your blessings, scrolling down through newspaper headlines and sending to trash all these e-mails with flight offers from all the frequent flier programs you joined on your last trip, which translated into yet another name card in your heavy wallet. 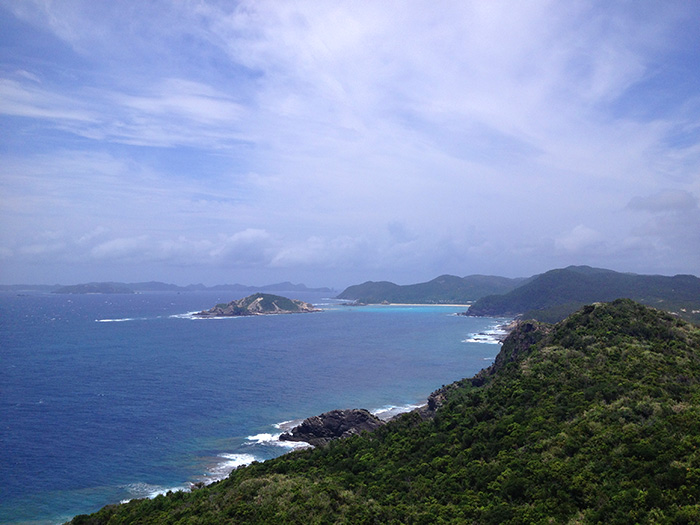 I have an obsession with the ocean and the skies, and I take many pictures of the combination every chance I get. I fear the ocean for what lies inside it, and I can hardly make for a couple hundred meters into it alone before I begin to fear the coming of a great white shark, a whale shark, a killer whale, a minke whale or a blue whale or a combined party when looking into the underwater infinity with my goggles. Along with the skies, its lifelong partner, I just can’t stop staring at the beauty of the two worlds clashing at the horizon, with the supermassive oceans, majestic and grand and all, extending homogeneously from there till my very feet at the shore, and the grandiose skies producing clouds that don’t know about perspective and just take over, looming over and looking down upon the waters that get darker and even more fearsome as they get shadowed.

One such battlefield can be seen here, below. If this imagery does not bring you fake memories of gods and the Empyrean and Valhalla, nothing might…

This picture below shows what low tide looks like: you can sometimes  just walk across the gap between islands. 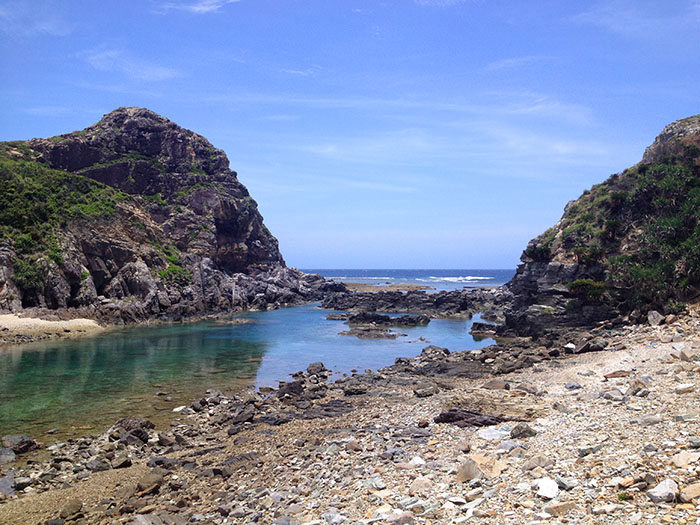 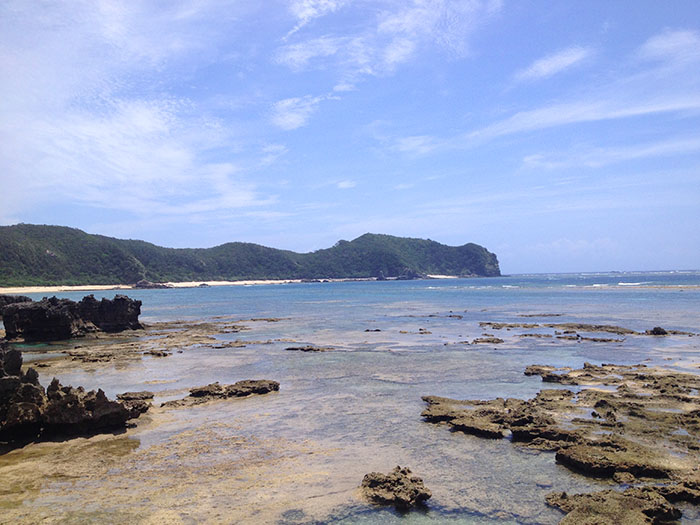 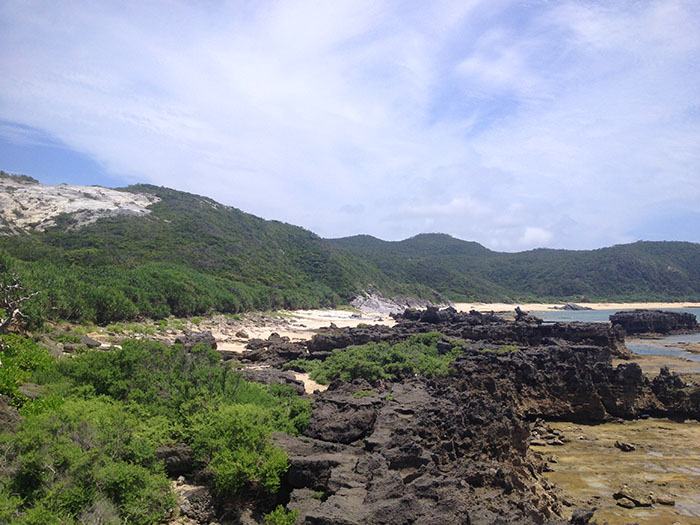 Thousands and thousands of crabs from hundreds of different genera populate the island as well. Any patch of land, sand or rock can magically transform into a colorful crab of a species you have never seen before. 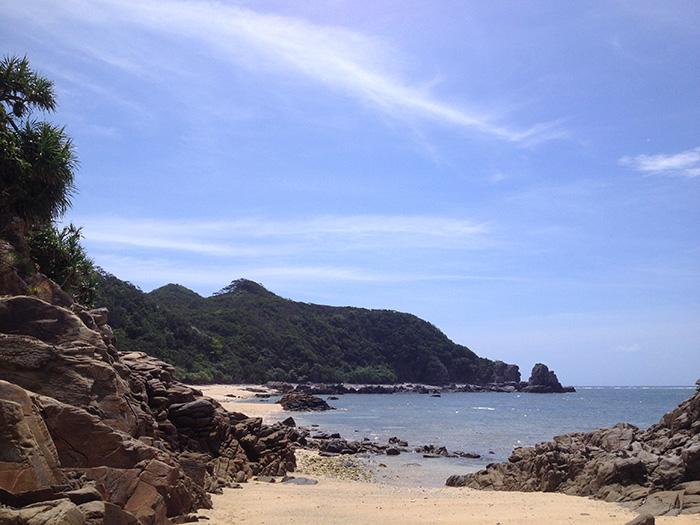 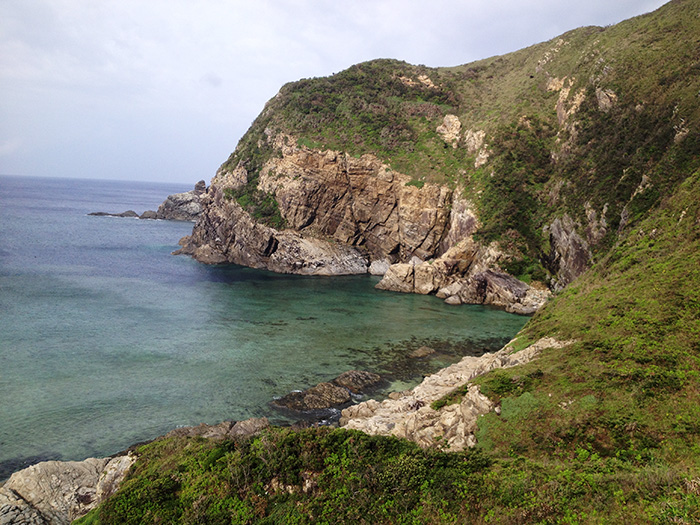 The beach below is where I first encountered the crazy old couple. They were camping at the beach, which was kind of “their” beach now. She played the ukelele and he played the flute, and were the happiest couple in the island. As I was strolling alone along the sands of Ama Beach later at night, looking for a spot to sleep while finishing my last beer, I heard someone softly yelling “Spanish! Spanish!” from the bushes. I quickly pieced things together and realize it was the couple again. They confessed to me they were actually from Mars and Alpha Cassiopea, respectively. He is a Hawaiian marihuana dealer turned stone artist and she is a fashion designer, so their relationship is considerably trippy and picturesque, and their life together is as improvised and meaningful and meaningless as they wish it to be. We discussed the tides and the Japanese traditions and beliefs behind them, we discussed traveling and twisted accents, polygamies and monogamies, long-gone emperors and their obsessions with the power of the words -those kept and those shared-, and finally the man produced a kite and there we were, the three of us trying to fly it under the full moon, failing miserably. As the night grew windier and these characters faded away, I laid down on the beach and tried to grasp the immensity of the universe, with Victor Hugo’s Bishop Myriel’s thoughts on the serenity of ether, the splendor of the constellations, the ecstasy in the midst of the universal radiance of creation and the mysterious exchanges of the abysses of the soul with the abysses of the universe flooding my mind as the Moon remained up there, as white and massive and unmovable as the Taj Mahal on the shores of the Yamuna river. “To travel is to be born and to die at every instant; perhaps, in the vaguest region of his mind, he did make comparisons between the shifting horizon and our human existence”, said the Bishop. 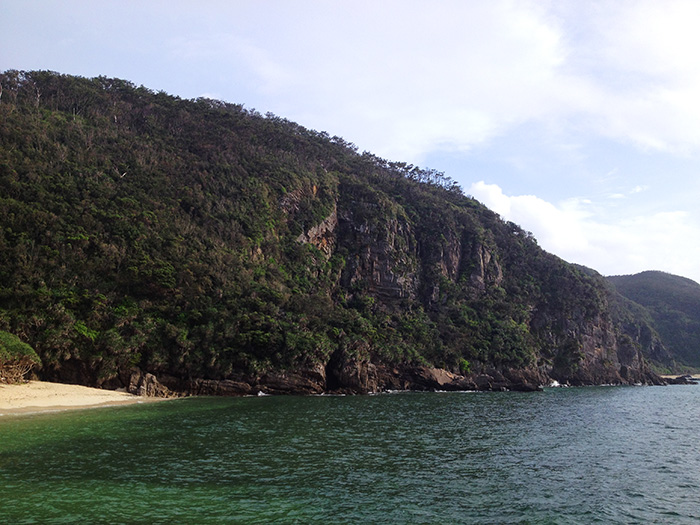 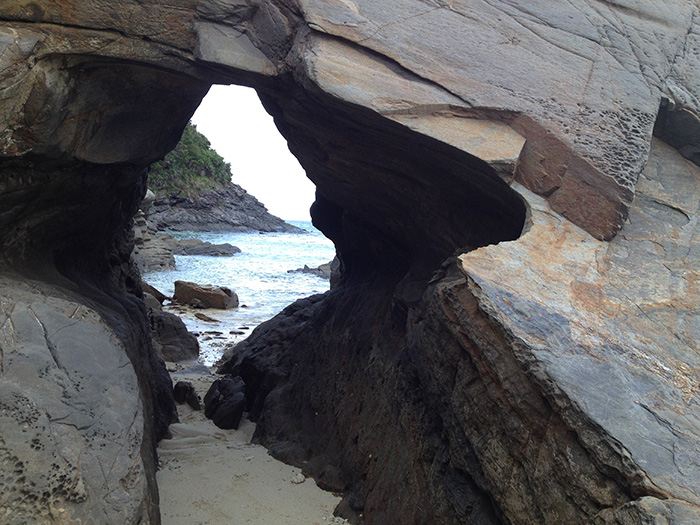 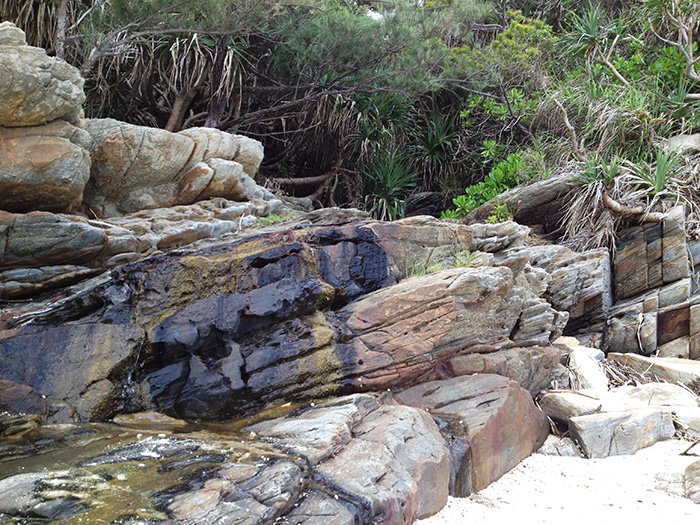 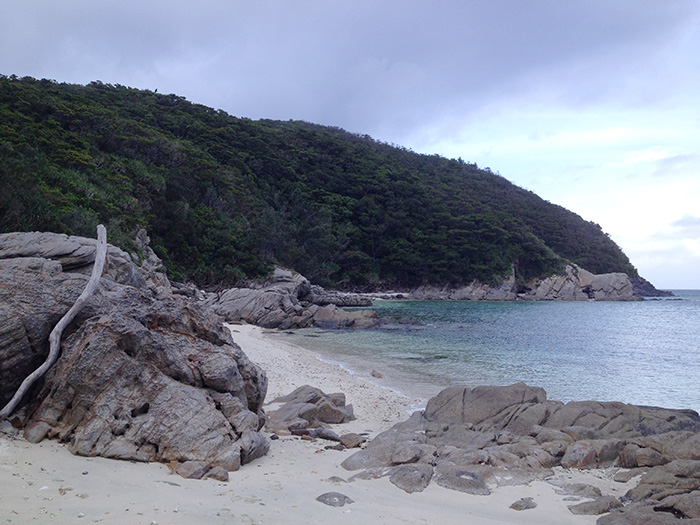 This picture below is the very first scene from the pilot episode of your adventure, when you wake up in the middle of the jungle and run towards the beach where the plane lies, and find your father wearing a black suit. 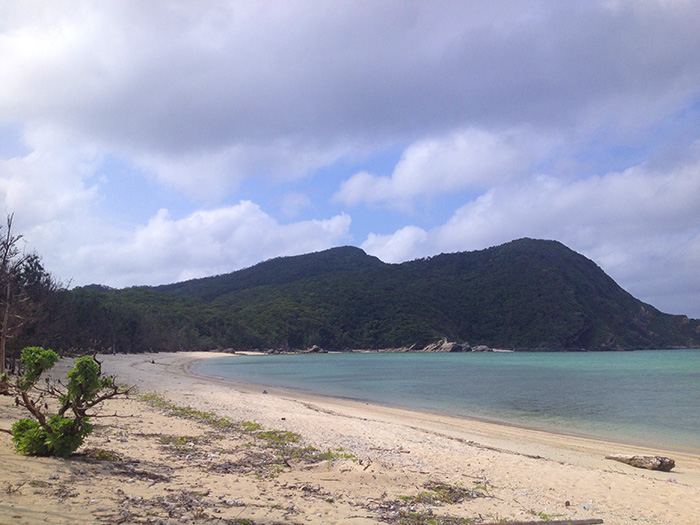 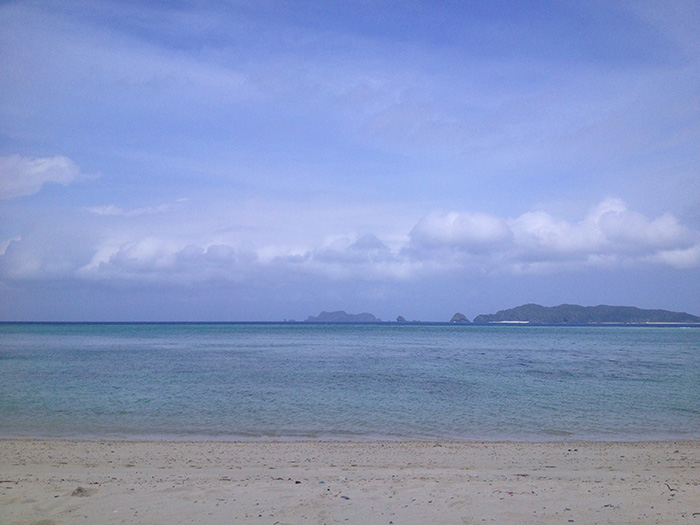 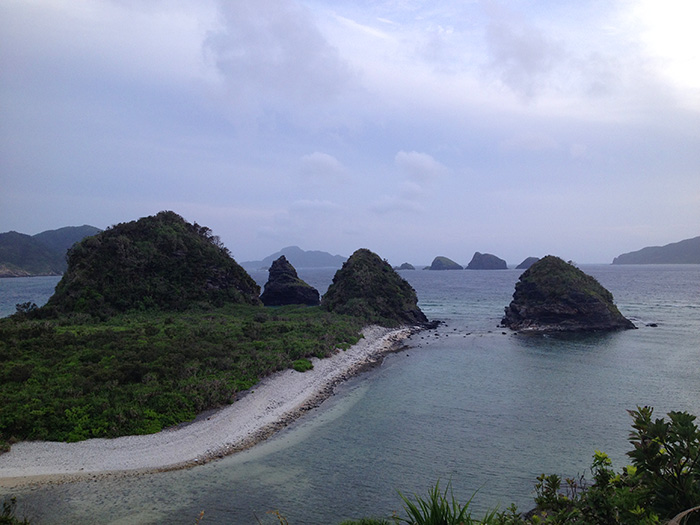 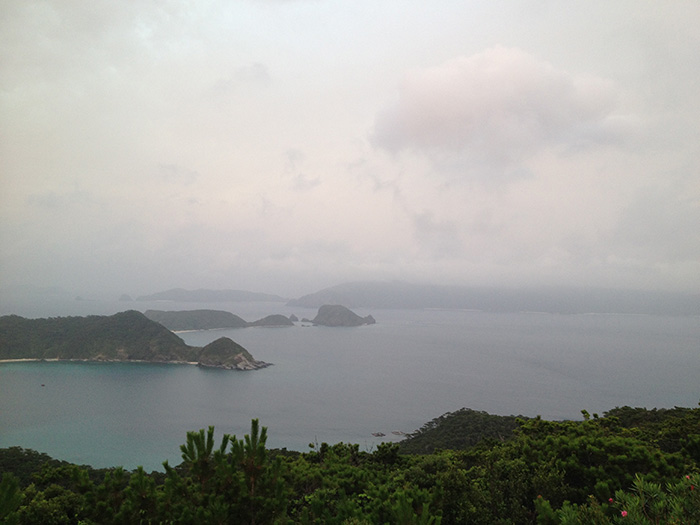 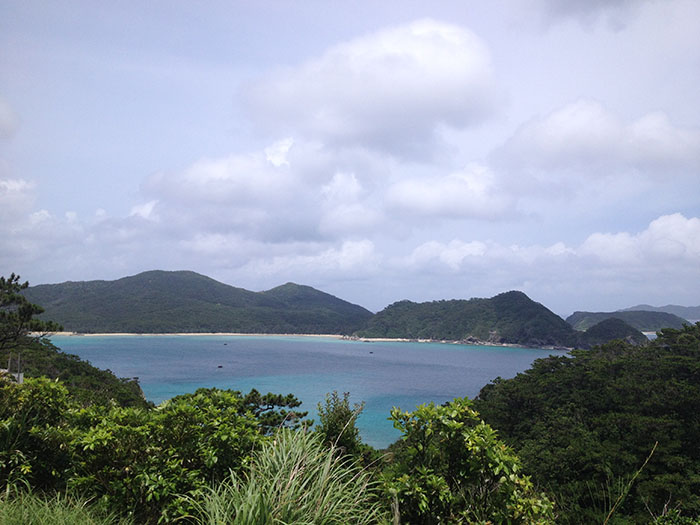 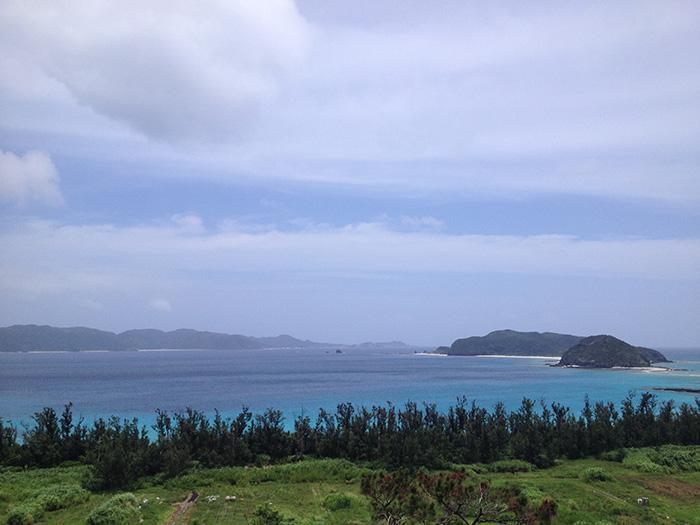 Also in no particular order, these pictures are from the inhabited part of the islands; the towns and the beaches where them tourists buy their sodas and destroy the corals. 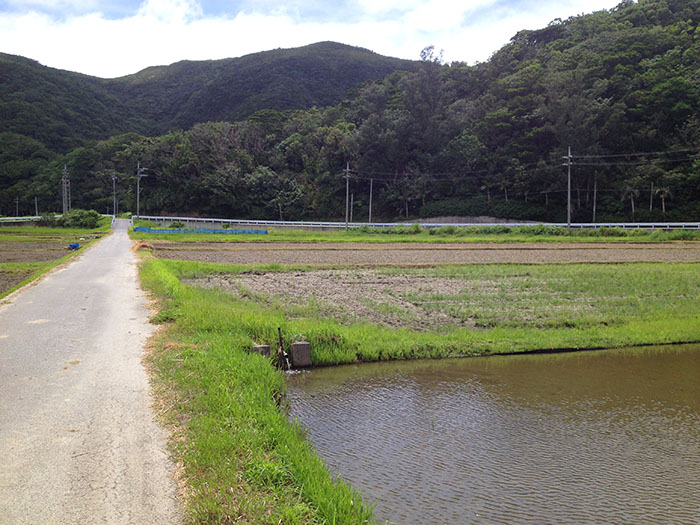 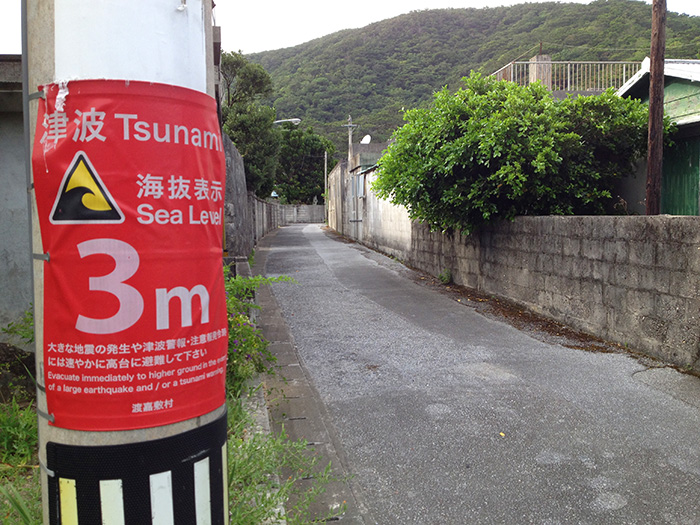 To go off the beaten path in your journey, you need to get to know all there is to know about the beaten path first. So in my very first day I quickly headed to Ama Beach, one of the two tourist beaches of Zamami island. While swimming around this place, I came across this huge giant turtle, some 140 cm long, who was not bothered by my presence and my urge to touch it and try to play with it for a bit like the foolish and stupid tourist I was at the moment. Another two other turtles, one of them a small one, followed up, so my time in the archipelago was already unforgettable from the very beginning, half an hour after setting foot on the first island. 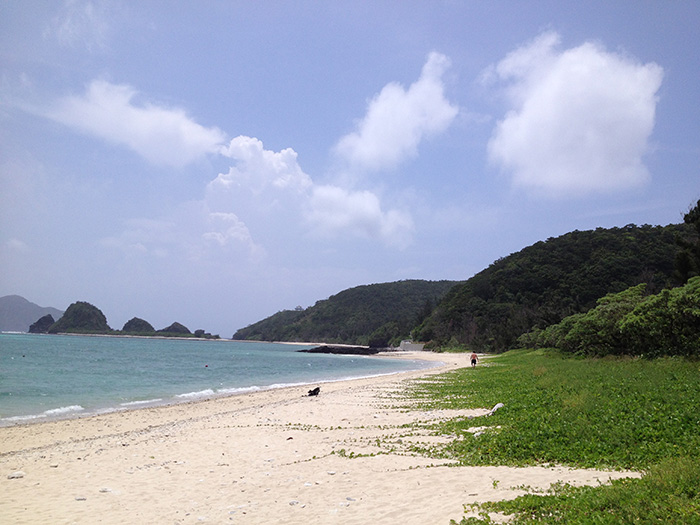 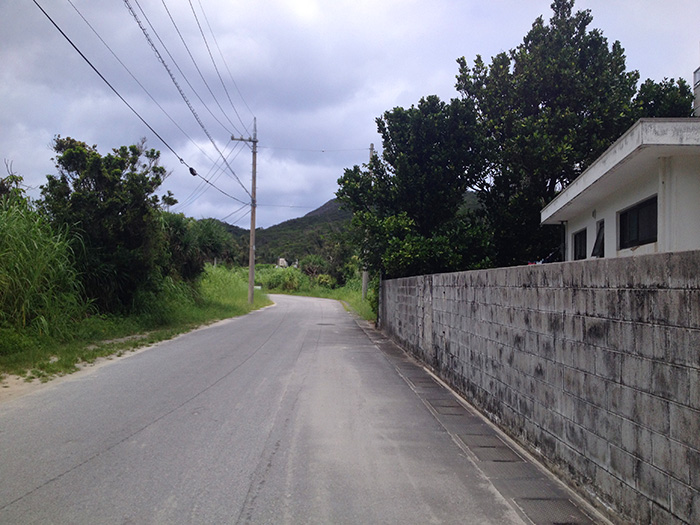 There are many typical ingredients, snacks and dishes from this corner of the world, but there if there is one thing that one must get to know about, that is the Habu sake, or snake blood sake.

4th of July of 1776 was the day that the thirteen north-American colonies were declared independent from the British Empire. So it is a very big deal for many yankees. On my 4th of July this year, I happened to spend the day and night at Kerama Guesthouse in Naha, Okinawa. I thought I might as well share some pictures of the hostel’s 4th of July party. I recommend this hostel to any backpackers out there. Naha and the main island of Okinawa can seem to be rather uneventful because interesting things and event are very far away in space and time, so choosing the right place to sleep is very important. The atmosphere was that of a family, with most of them -Japanese and foreigners- either working at the hostel or at the nearest US Marine barracks, and then just a few of us actually paying for a bed. It was also my first time being completely drunk at the airport, and one of the most boring and uneventful flights ever. 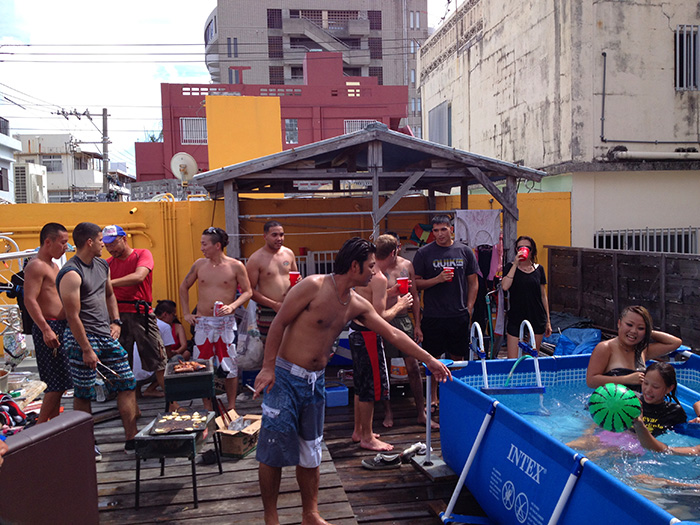 “Zamami, me love you long time. All day, all night, me love you long time.” This and tens of other quotes from Alex Garland’s The Beach resonated in me throughout the entire time I was hopping around the islands of Zamami, Tokashiki and Okinawa, south of Japan. It is an extremely exciting story that gets as inspiring as real, and the spark that is going to make me spend big bucks to ultimately visit every reachable island out there hidden in the open sea. Okinawa is but a hundred European bucks away from Tokyo Narita, so please go there. 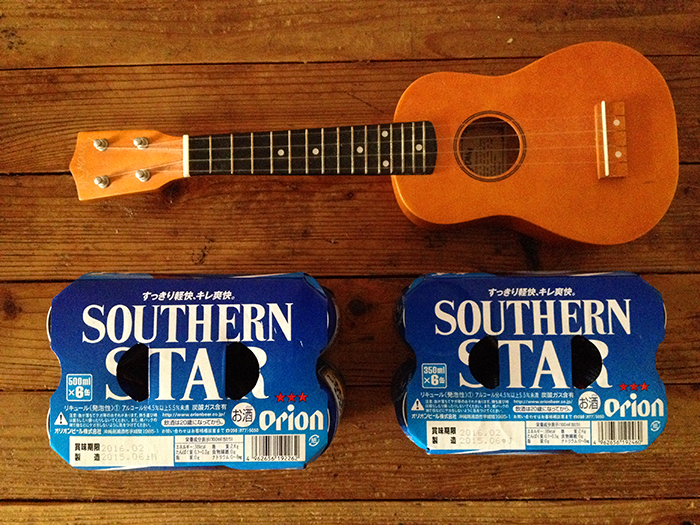