I always have a book with me, wherever I am. It’s always in the top pocket of my backpack, with my passport, a pen and any other important documents.

Sometimes I stick to local literature, sometimes to classics, and a lot of times whatever gem I can find in the travel section of a bookstore.

Travel books are usually inspiring and add yet another layer of beauty and fun to any trip.

They explore local and remote cultures from peculiar points of view, and sometimes contain that piece of wisdom that you keep with you like a pearl.

Beyond the 4 travel books to get started with travel literature, the following are travel stories and memoirs filled with adventure, fun and wit.

These are books I have deeply enjoyed, and I recommend to any type of traveller, wherever she or he might be.

On The Road, Jack Kerouac

A quintessential travel book. This book inspired thousands of boys and girls to jump on their cars and travel across America and into the world.

“On the Road” is one of many “beat generation” novels that depict the frantic and intense lives of a group of friends during the 1950s. It dissects friendship, love, and the machinery that keeps America running.

Kerouac and his carefree friends Cassady and Ginsberg explore the night and day of the road and the big cities, indulging in jazz, conversation, drugs and poetry. They drive away to find themselves and the point of everything.

The writing style of Kerouac is equally if not more frantic than the adventure itself.

“I like too many things and get all confused and hung-up running from one falling star to another till I drop. This is the night, what it does to you. I had nothing to offer anybody except my own confusion.”

A common follow-up is Kerouac’s “The Dharma Bums” or Ginsberg’s “Howl”.

This novel is an old school adventure book (similar to Lost Horizon). It was the first English novel set in Africa, and it was dubbed “The Most Amazing Book Ever Written”.

Because many regions of Africa remain unexplored by outsiders, the magic in this book remains relevant. Haggard knowledgeably describes a part of the world and a point in our history that are unknown to most of us.

It is a quick read filled with the kind of authentic adventure full of hidden treasure and death traps. After reading this, you will be happy to know that Haggard wrote more than 50 adventure novels.

Hitching Rides with Buddha, Will Ferguson

This is one of my all-time favorites. Will Ferguson narrates his own hitchhiking experience in Japan: he travelled from the end to end, following the blossoming of the sakura trees in spring. For someone uninitiated in the art of hitchhiking, it is even more interesting.

His funny exchanges with locals and his clever remarks make this book very entertaining. Because of that, it also reads like a breeze.

In the beginning (he starts his trip from the south), Ferguson stresses on cultural differences between Japan and the West through his experiences. All his encounters are briefly mentioned.

As he gets into the later half of the book, Ferguson moves on from his initial descriptiveness and lets longer chunks of dialogues do the storytelling alone. These conversations brilliantly explore more and more of the traits that make up modern Japan.

Albeit heavily focused on Japanese culture, this book succeeds in transmitting the hitchhiking vibe. If you have never hitchhiked, you will be seriously inspired to start doing so.

“Cape Sata is the end of Japan. When you turn your back to the sea and look northward, all of mainland Japan is balanced, swordlike, above you. It is a long, thin, volcanic country: a nation of islands that approaches-but never quite touches-its neigbhours. It is a land that engenders metaphors. It has been likened to an onion: layers and layers surrounding… nothing. It has been described as a maze, a fortress, a garden. A prison. A paradise. But for some, Japan is none of these. For some, Japan is a highway. And Cape Sata is where it ends.”

Falling Off The Map, Pico Iyer 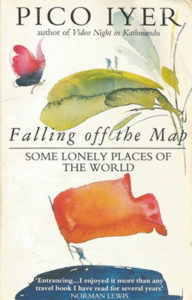 A pioneer and master of travel writing, Pico Iyer once again shows off incredible descriptive ammunition in “Falling Off The Map”.

The book starts with a spectacular essay on “lonely places“, then dedicates a chapter to a few of them, including Argentina, North Korea and Australia, among others.

Iyer sometimes seems to approach every chapter with a different writing style.

His descriptions of bohemian Buenos Aires and post-revolution Havana are magnificent. You can almost hear the music and feel the air of those cities at night.

“There is, in fact, a deafening strain of rock’n’roll in Iceland, and it is the voice of kids banging their fists against the narrow limits of their culture.”

These nostalgic memoirs were written in 1994. Interestingly, some of the places described are still lonely places (namely Bhutan, Iceland, or North Korea).

And in places that are no longer lonely, such as Saigon, travelers now visit them in hopes of finding what’s left of a vibe from 25 years ago.

“The Alchemist” takes a young Spanish shepherd across North Africa after a fortune-teller reveals to him that he will find a treasure in the pyramids of Egypt.

Basically, it is about following your dreams. The story is high on wanderlust, and the writing is very beautiful.

“The simple things are also the most extraordinary things, and only the wise can see them.”

Although it often seems to cross the line and read like a self-help book, it will certainly inspire you to seek greater adventure whether you know your way or not.

Up in the Air, Walter Kirn

Like many others, over time I have come to perceive airports as a second home, part of my comfort zone.

For those who love the airports and airplanes side of traveling, “Up in the Air” hits home.

Ryan Bingham is a business man who constantly flies across America. He has high regard for metrics such as accumulated miles, or the color of your credit cards.

The cocktail is completed with epiphanies and mile-high love stories.

Do you have other travel books that you would like to recommend? Let me know in the comments section!

Disclosure on affiliate links: This article contains affiliate links. If you make a purchase or a booking through them, I receive a comission at no extra cost to you. This comission helps me keep this site up and running.

2 Replies to “6 travel books for a journey”