The Nohkalikai is the tallest plunge waterfall in India. It is one of the craziest sights in the beautiful valleys of south Meghalaya, one of the wettest places on Earth.

For the fortunate ones that venture into the somewhat remote northeast lands of India, this fall is an absolute must. It is located in the East Khasi valleys, near Sohra/Cherrapunji, where the living roots bridges around the village of Nongriat take the spotlight. 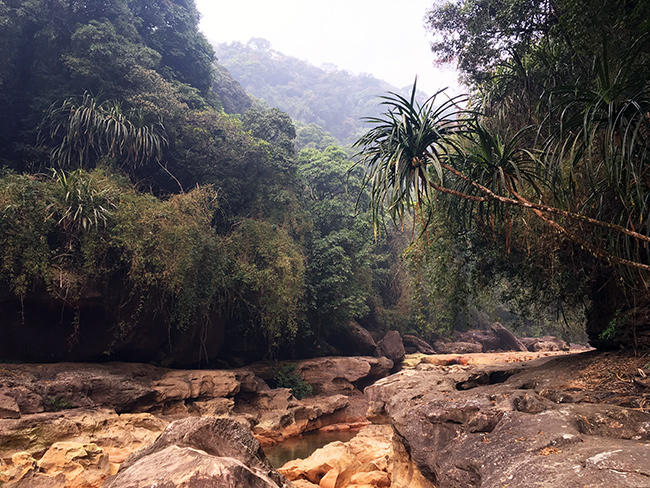 There is certainly a dark side to the Nohkalikai Falls, if not a horror story.

A widowed woman by the name of Likai struggled to survive on her own after her husband passed away, working hard and long. When she finally remarried, she kept her job. The husband was unhappy with how much attention the infant received from her, and how little attention he himself received.

Jealous of the infant, he killed and cooked her for dinner one day. Likai, tired from work, ate most of the dinner before finding a finger in the food. She suddenly realized what was up and obviously went mental with anger and grief.

She ran and ran, and when she reached the edge of the plateau, she did not stop and fell down the waterfall. “Ka” is used before female names in the region, hence “Kalikai” in the name.

The guys who told me this story were having their own rave party on the plateau, a couple hundred meters from the waterfall itself.

They had a trunk full of drinks and food and a nice sound system. The party of five invited me to join them when they saw me roaming alone, and so we became half a dozen happy souls.

We quickly moved on from the sad story and instead danced and celebrated what was good in life. For a few days I had the feeling of being isolated from the world, but those bass lines brought me back to the 21st century. Or maybe it was the alcohol in them. 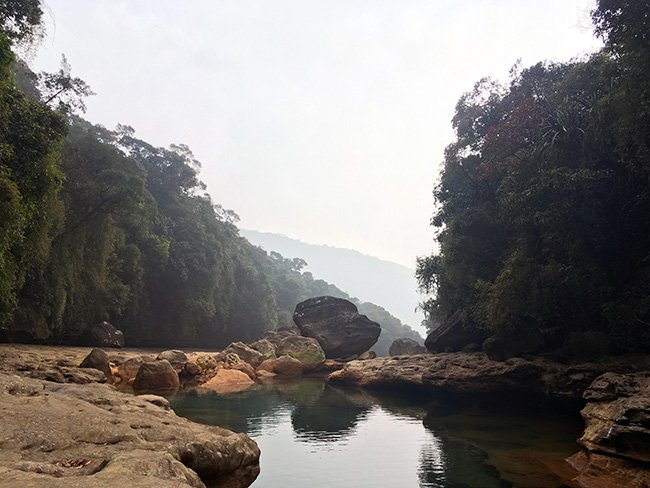 The Nohkalikai falls are walking distance from Sohra.

From Shillong, the easiest way to reach Sohra (also called Cherrapunji), is to take a sumo, a shared four-wheel car. You will find the yellow sumos on the second floor of the sumo parking/stand in Bara Bazar (25.575866, 91.876468).

Even if the building looks empty or abandoned, go upstairs early in the morning and look for “Sora” writing on the columns/ceiling. Once a sumo shows up, it will depart as soon as it gets full. Alternatively, small cars are also available there, and take less time to fill up with passengers because they have less seats. Wednesday is market day, so there is an increase of cars going in and out of Sohra.

Once in Cherrapunji, I recommend you to walk all the way to the waterfalls. It takes about 45 minutes, but it’s a high-ground path with unique landscape.

The fog gives that road an end-of-the-world vibe that is super cool. The brownish vegetation of the higher grounds is separated by the green valleys by 300 meter tall cliffs. 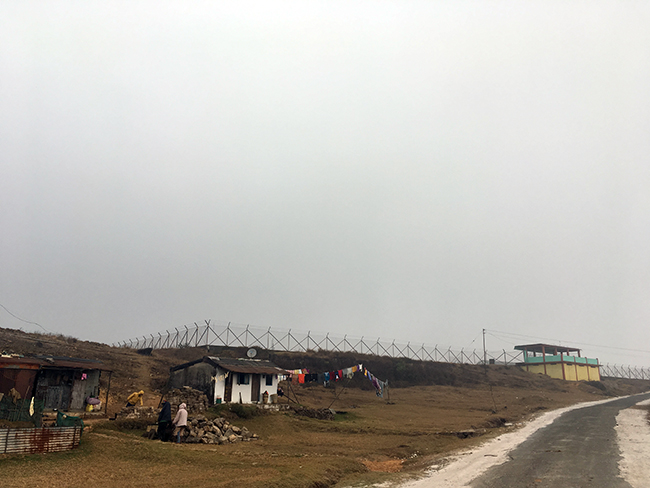 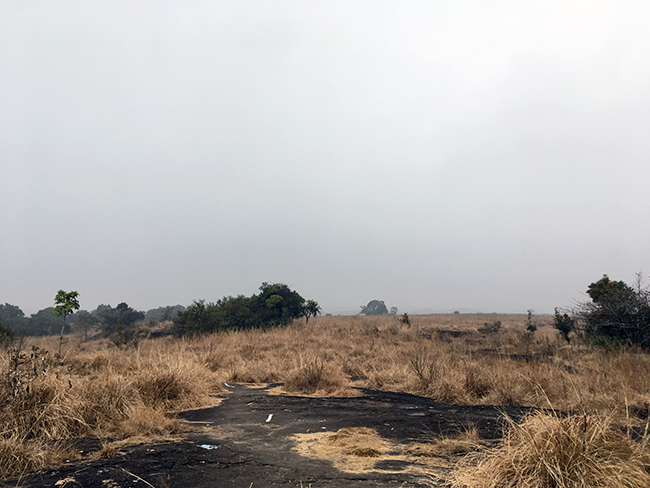 Before you spot the waterfalls, you’ll find some food stands, a restaurant and a toilet. Past those, a viewpoint stretches along the cliff.

Turn your head to see the falls. It looks like something taken right from the Avatar movie. 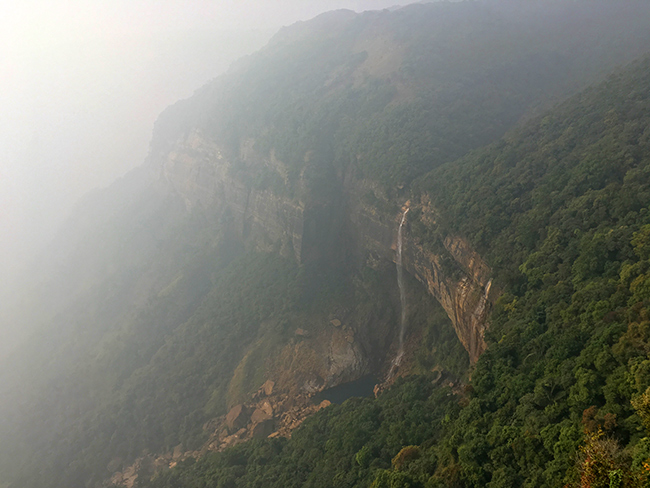 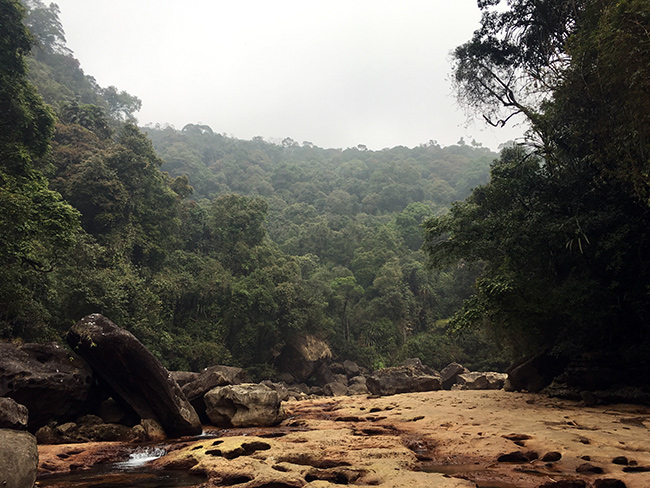 Outside of the rainy season, there is another secret place for you to discover.

It is actually a rather small canyon, but it’s guarded by tropical trees on both sides, and that makes it so beautiful. 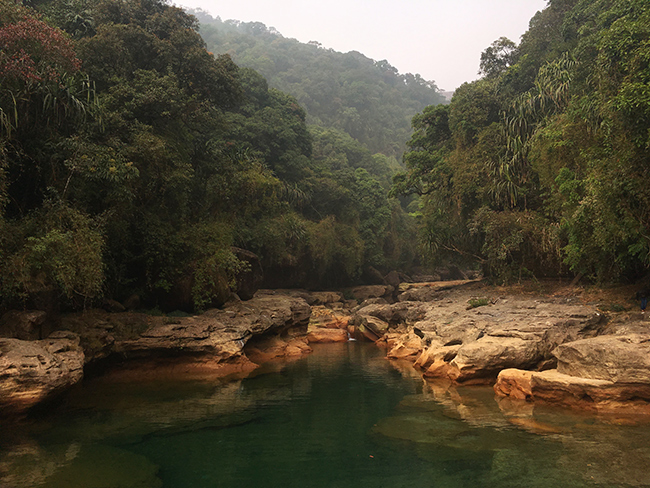 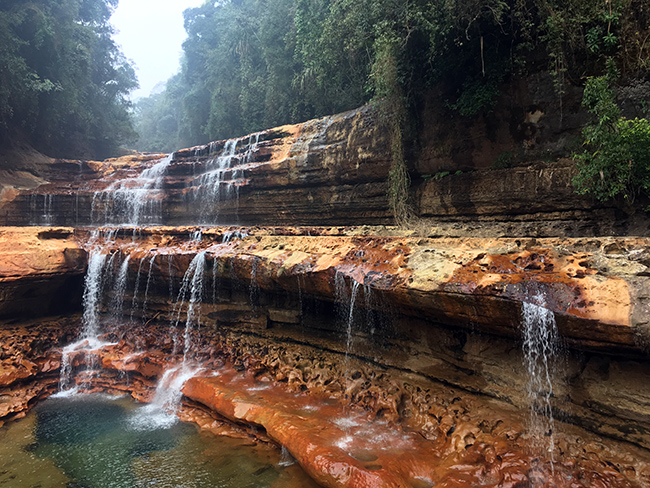 Once you reach the canyon, you will see a smaller two-story waterfall. An easy climb takes you to the top floor of the waterfall.

Now, time for the main event. When dry, holes and rock structures in all shapes appear along the canyon: a cool playground if you like jumping and climbing around like a monkey. Make your way down into the mouth of the waterfall and you will eventually see… that you can… sit on the very waterfall, with the green valley at your feet. 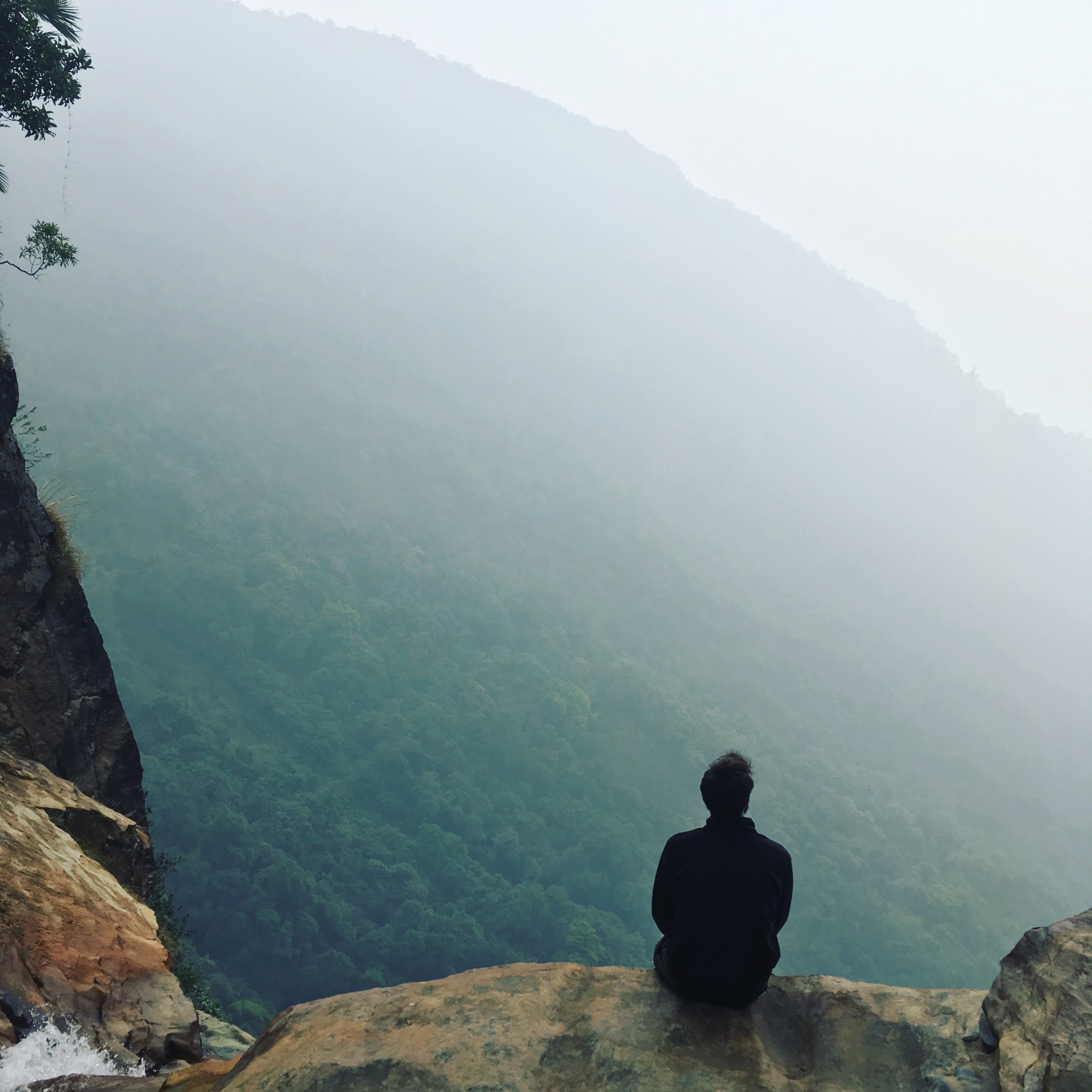 Getting back in a hitchhike

Although my initial plan was to walk back to Cherrapunji, I could not resist trying to thumb down a car on the way back.

Then, the very first car that passed me stopped to allow me in.

Three kind fellows around my age offered to take me all the way to Shillong! We stopped at the Orange Roots restaurant and they again and again refused to let me pay for anything, not even my own meal.

They threw in a bunch of food names that I cannot remember any more, and we exchanged some dreams. In the end, I may have annoyed them a bit, because I asked them to stop the car a lot of times to snap pictures of the landscapes flying past us. 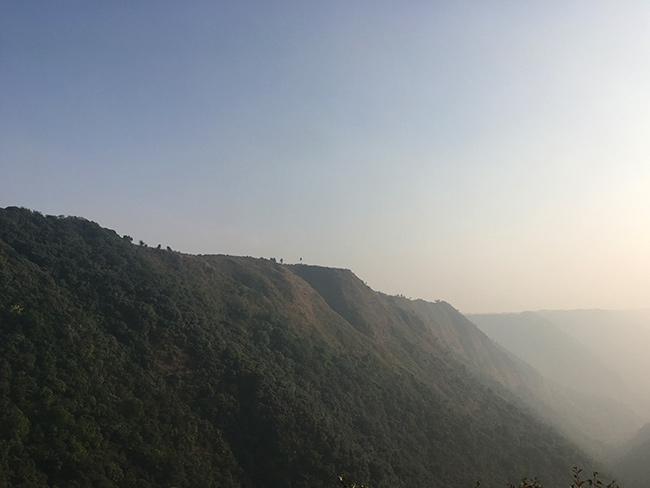 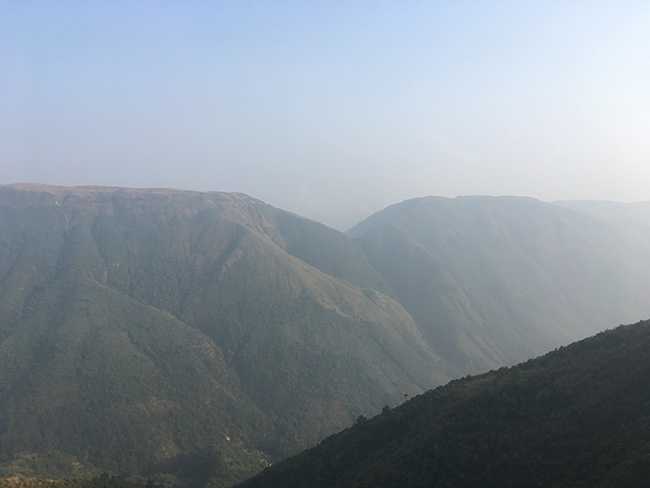 Words fail me when I try to describe just how crazy beautiful and fun that was. If you visit during or after the rainy season, you will have the chance to lose yourself in the majestic Khasi valleys, maybe the greenest on Earth?

And at the very heart of one valley lies Nongriat, a heavenly place where time stops and everything around you feels so alive, and everyone is beautiful and you don’t want to ever leave.