This leg of my trip turned out to be the quickest in the continent: 350 km in about 8 hours. Way quicker than hitchhiking from Hsipaw to Inle Lake a few days earlier.

The journey was filled with interesting people, smiles and loss in translation.

The bus from Inle Lake leaves at 7am/7pm and reaches Bagan at 4pm/4am, also about 9 hours (if all goes smoothly). 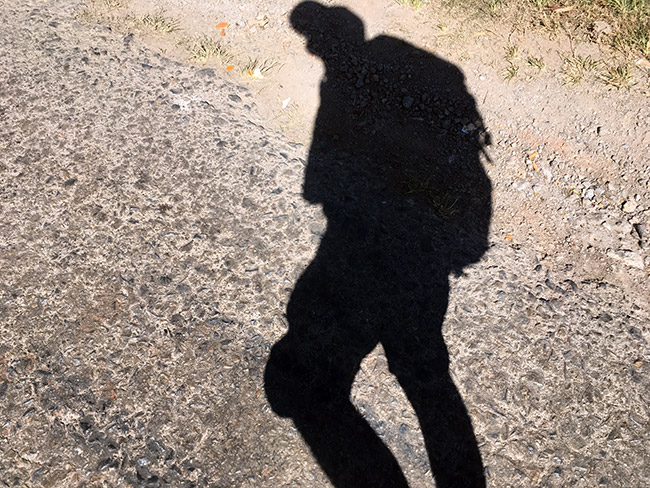 From Inle Lake to Kalaw: the salesman’s life

The plan was to set out from Ostello Bello hostel in Inle around 8AM to have enough day light to get as close to Bagan before night time.

I took a piece of paper and wrote the names of the towns that lay on the way to Bagan, and reluctantly packed my backpack. Inle had been absolutely beautiful. The lake, breathtaking; the food, delicious; the new friends, warm and fun.

After a lengthy breakfast full of goodbyes and also new faces, I set out with two fellow travellers. Their plan was to hitchhike to Hsipaw.

So the three of us stepped onto the Shwenyaung – Nyaungshwe road around 11AM.

With lots of luggage and backpacks with us, it was hard to thumb down any car. We walked for about 40 minutes until finally a gentle salesman took us in.

Once in Shwenyaung, my friends stepped out of the car. As I did the same, the driver told me “Oh, you said you’re going to Bagan, right? I can take you to Kalaw.” After hugging my friends farewell, I moved to the front sit.

Mr. Salesman was really busy that day. He kept getting calls that would change his scheduled route. At some point, I cut my piece of paper and used the blank half to write down the new places Mr. Salesman had to go that day.

By the fourth call, I noticed frustration in his eyes. “More places… Today, I will not see my wife.”

After deciding on the optimal route for his journey, I noticed that the menus on his radio screen were in Japanese.

“Myanmar cars from Japan. Japanese cars almost new when they bring them.”

Myanmar is one of the many afterlives for Japanese cars. In this case, they don’t bother to make all necessary modifications; hence the radio module in Japanese.

Even if vanishingly small, I was happy to provide some help in return. My Japanese skills were enough to configure his radio and, most importantly, switch the display language to English.

We had a very nice time together, him initially suspicious of me for not having wife nor kids. We both enjoyed each other. He drove me to Kalaw, and I regretted not being able to accompany him further. 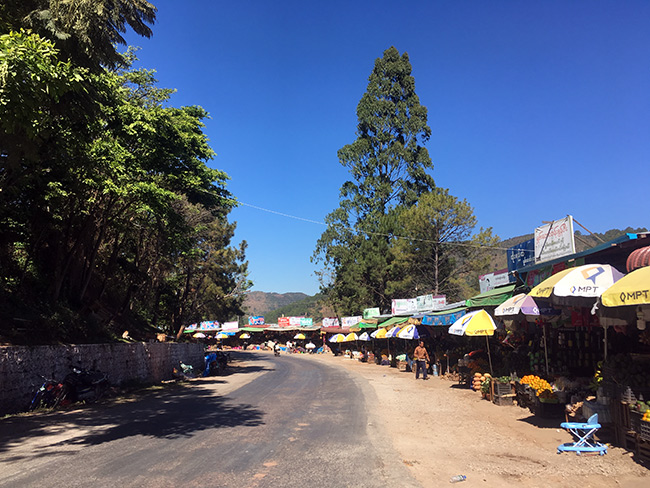 The elephant and the monk who puked on me

Once in Kalaw, I set out for the outskirts in the west of town.

In most Burmese towns, there is a buffering sort-of area between the city and the wild country. As you get away from the center of the village, houses get smaller and smaller, and roadside businesses appear less and less sophisticated. People also get friendlier and friendlier.

However, Kalaw suddenly ends on its north-west side. The city street abruptly becomes hilly, zig-zagging along the valley.

Because of that, there weren’t any good spots for hitchhiking. I stood on the first big turn that was slightly shadowed from the beating sun. There wasn’t enough room for  big trucks to stop, so I set my hopes on some small car showing up.

What felt likes ages later, a pickup car stopped and the driver promised a bumpy ride to Thazi. “Yes!”

So I joined these two monks who were also lying in the back of the pickup. They quickly fell asleep, and I realized that was the smartest thing to do: the road bended endlessly in every direction, and the driver seemed to be participating in a rally.

Halfway to Thazi, two big military hands woke me up and lifted me out of the car onto the dusty road. Half a dozen sweaty soldiers went through my backpack and asked me questions I could not understand.

Then they directed their questions to the driver, who spoke back in a laidback way that seemed to mean “I don’t give a damn what you do, I just picked this hobo on the road and he has no money.”

They instructed me to climb onto the pickup again, and then I just closed my eyes as soon as they lost interest in me.

Unable to sleep again, I took in the scenery. A while later, we passed this small truck carrying an elephant.

I wondered about the physics that prevented the animal from falling on the sides of the road, but then I noticed white, sticky particles raining on me.

The younger monk was now awake and was vomiting half-digested rice in every direction, jerking his head around due to the spasms. Fountain-like.

His and his fellow monk’s clothes were covered with vomit, and so were my backpack and my clothes, and magazines and boxes that belonged to the driver.

I offered the monk a couple of plastic bags and all of my wet wipes (always carry wet wipes wherever you travel!). We kind of cleaned things a bit and the monk fell asleep again.

I moved away from the monks and to the back of the pickup. There was nothing to hold on (the ride was one of the bumpiest in my life), but at least I would be out of range come further white rain.

Surely enough! He woke up again and started vomiting over every surface we had cleaned. His friend’s bald head was now covered in white porridge…

He directed a needy look at me, but I had no more wet wipes to offer. I threw an old T-shirt at him. “No paper, sorry.” I shrugged and showed him my empty hands to translate my words into Burmese.

In Thazi we arrived, and in Thazi my sunbathed dreams were sharply interrupted by an angry man who had just found his pickup full of vomit. He yelled coarsely at me and kicked me out of the car.

I smiled at the monk and wished him well. 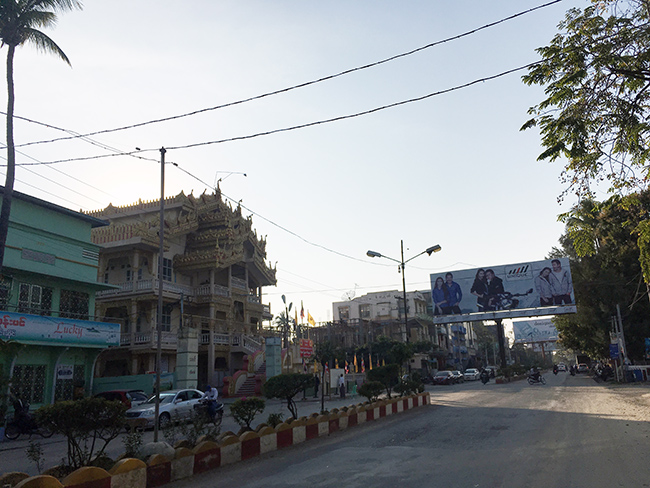 Fresh riding from Thazi to Meiktila

Thazi was a busy hub, so every driver I flagged down asked for money.

The sun was high and there were no trees to protect me by the side of the road. This, plus a lot of waiting time, almost made me give up.

Finally, a happy-go-lucky soul stopped. He could take me to Meiktila. Cool!

“Do you have money?” He replied.

We laughed and he accepted to give me a free ride. A couple of kilometers away from Thazi, the road was fully covered with trees. The fresh air carried a leafy smell as we cruised through.

Along this 22km-long stretch lies a textile factory of Myanmar’s army. It was probably closing time, and hundreds of workers semeed to come out of it, dressed in cerulean blue, head to toe.

It is a crowded road. I finally noticed some cars had the steering on the right and some on the left, but all of them drove on the right.

“So some cars have right-hand steering and drive on the right?”

Under British rule, Myanmar drove on the left. Then, in 1970, the astrologer of the wife of the general advised the general to change to right-side driving as it would be good for the future of the country.

Now, Japanese cars are right-handed. So they have left-steering and right-steering cars and everyone is okay with it. Or it was, until now: a recent law suggests that no more right-hand cars will be imported.

I am no astrologer, but I think that’s good for the country. Not so good for Toyota.

I did not do much in Meiktila other than walk around the Dama Thukha Shwe Zee Gone pagoda (hopefully I spelled that right) by the Meiktila Lake. I didn’t find much else to do.

On the outskirts, past the lake, there was a batch of road with wide roadside fields full of shadow in front of the Ministry of Transportation.

There I found my last ride: a couple of newly weds on their way to visit relatives near Bagan.

Bagan is 150 km far from Meiktila, so initially I just asked for a ride west, as west as possible, any town is fine. Then the man saw my piece of paper with town names and arrows.

Thankfully, the woman spoke some English. She told me they could take me all the way to Nyaung U on the east side of the Bagan complex, where my hostel was.

After visiting a few relatives, they wanted to travel around the whole country. “We don’t have much time, but we will try to go everywhere. We married one month before.”

I congratulated them, and made sure to fix their Japanese radio so that they could use it during their honeymoon.

On the way, we stopped for drinks and snacks a couple of times. Bagan was already in my mind, but I wasn’t in a hurry any more.

Since I entered the region in a private sports car, no policeman bothered to stop us. I didn’t pay it and felt good and bad about it, and walked to Lux Pillow City Centre. The hostel is run by a kind young man, and there I came across a French couple I had trekked with in Hsipaw.

I made sure to wake up at 5AM for my first of many sunrises. And surely, Bagan delivered. What a time to be alive.

Sunrises in Bagan are breathtaking, probably one of the most beautiful ones on this planet. 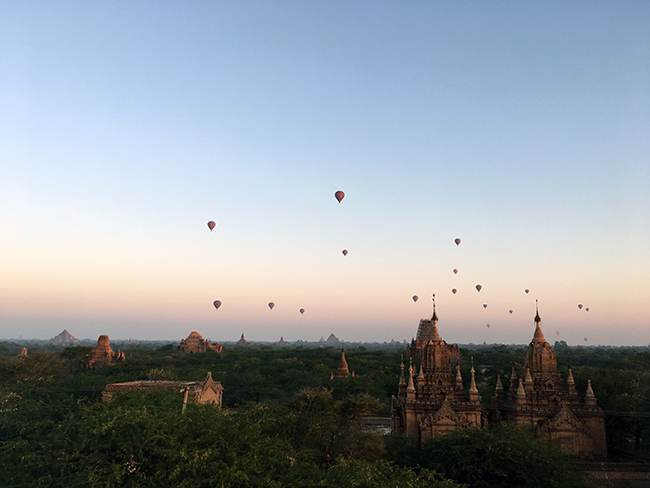 One Reply to “Hitchhiking from Inle Lake to Bagan”