The island of Zamami, or Zamamijima, is the most popular of the Kerama Islands, an archipelago 35 km off the coast of Naha in Okinawa.

It has lots of Japanese tourists, but that doesn’t matter because they all stay in a couple of tourist spots.

I got to know about Zamami through a Japanese comic book that I read as a kid called “IO”. The plot was stupid and the characters boring and superficial, but the author succeeded in depicting an island slice of life that attracted me a lot.

I was captivated by that peaceful everyday to crystal clear waters, fine-sand beaches, and the majestic Pacific ocean.

I thought to myself that I would definitely visit it one day, and experience such quality of life first hand.

Years later, I found a return ticket from Tokyo to Okinawa for about 100 EUR, so I took it. 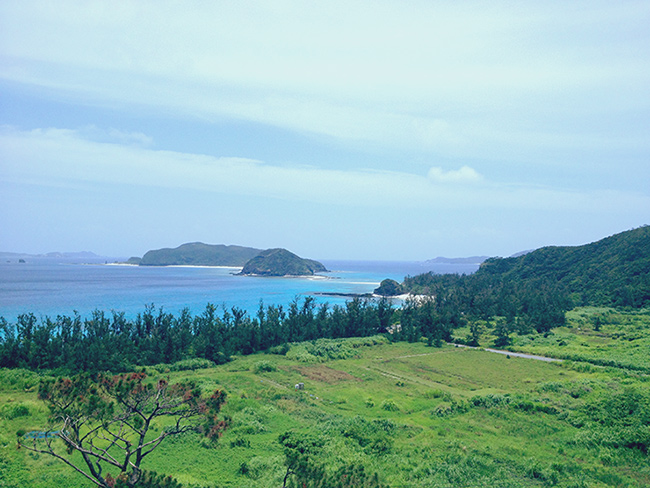 As you step onto the port of Zamami, the welcoming, warm streets of the village lead you inwards only to abandon you about six blocks later.

Yet the small village has more than a handful of food stores, restaurants and lodges. The cheapest place to sleep in-town is a youth hostel run by a British man on the northern side of it. The dude is a bit weird, but the place is nice.

Zamami is a diving and snorkeling destination, and so the vibe in the air is that of a diving community. Nonetheless, we were there outside of whale-season, so there wasn’t much diving going on.

The apparently grid-like planning of the village holds a few hidden treasures, including delicious tiny restaurants, bars, a hall for traditional dancing, and a couple of monuments.

The first thing one usually visits is Ama Beach. A stroll along the shore takes you there in less than 15 minutes, and you’ll pass Marilyn’s statue on the way.

Marilyn is a dog. She is patiently waiting for the time when her lover Shiro from Akajima (Aka Island) comes back to visit. The love story of Marilyn and Shiro is based on a true story.

Both dogs used to play together every day in Zamami, but Shiro’s owners had to move to Akajima. They missed each other so much that Shiro decided to swim for three hours across the two-mile ocean strait between the islands to meet Marylin every day. This story inspired the movie “I want to see Marylin“.

Ama Beach and hiking around

A bit further ahead lies Ama Beach, one of the two main bathing spots of Zamami. Although there are no corals, the place is popular because of the big turtles that visit the shore.

Sure enough, a few minutes into my swimming in the waters of Ama Beach during high tide, I came across the first of many turtles. Used to only seeing house-pet turtles, I was suddenly scared of that beast, but a fellow traveller dived deep enough to swim next to it.

The turtle did not seem to mind the respectful company of humans, it probably didn’t care at all to be honest. A minute later two more small-sized (assuming that the first turtle was normal-size) showed up and seemed to play around with the group of five swimmers that had gathered around.

Finally, a huge dark green turtle arrived and the other turtles quickly disappeared. It was so majestic that I couldn’t resist following it for a while. It took me far from the coast so I eventually gave up and wished it well.

Furuzamami, or the “old Zamami” beach, is only 20 minutes away from the port on foot. Ama and Furuzamami beaches are the two main ones where Japanese tourists gather.

In Furuzamami, you’ll find plenty of equipment rental for beach activities and snorkeling. Specially towards the south, where some boulders stand, heavy snorkelling has destroyed most of the ecosystem and there’s not really much to see.

We left Furuzamami after one hour… All you can see is families with kids enjoying ice-cream, playing with inflatables and snorkelling. So we left and decided to explore the land. 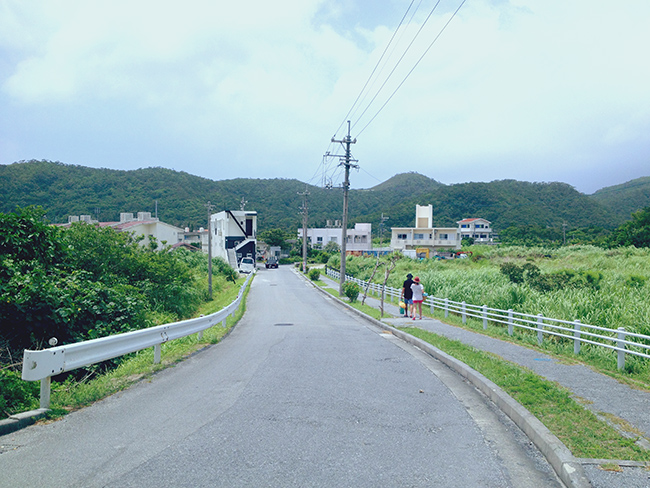 The rest of the island is yours!

The coastline of Zamami is an alternation of cliffs and beaches, one after another.

Despite there being a road that reaches most of the island’s small beaches and coves, only a few people do visit them.

It took us about 1h30min to reach the north-eastern tip from Furuzamami. Most of the road was not shadowed, so we suffered the heat.

At that end of the island lies Touma, a beautiful, long and white-sand beach. It stretches for about 340m and. The bottom of the sea is mostly sandy with no corals.

At its southern end, a path leads to yet another empty beach with rough waters that don’t appear very inviting, but the breeze is stronger and the winds help stand the heat peacefully.

We did not see a soul around the place. My friend wanted to chill at Touma under the shadows of palm trees. I chose to get naked and try to make my way till the Kuromae Cape (or Kuromaezaki), jumping my way along the rocks that separate the ocean from the first line of trees, like a monkey.

At some point I discovered a couple of white westerners in honeymoon mode, and they spotted me as I ran into them after working my way around a big boulder that penetrated the sea.

They probably thought their hideout was secret enough, and were taken aback when I suddenly showed up completely nude. 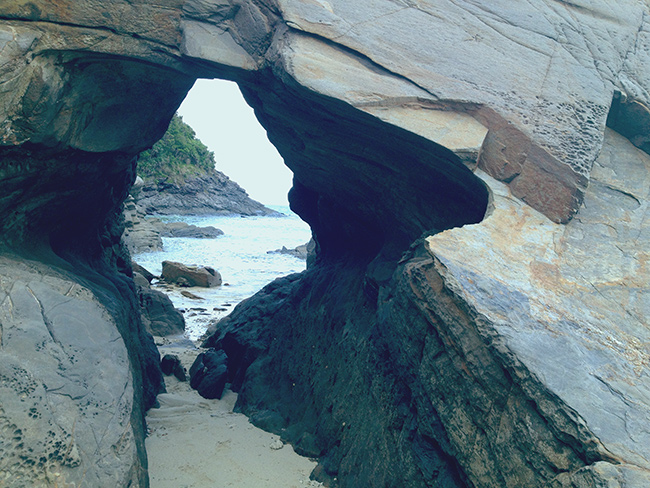 With my eyes full of apology, I gave them a Japanese-style nod, and I went on because I really wanted to reach the Kuromae cape. The cape was nothing special, but from it you can enjoy 270 degrees of hypnotizing ocean.

From there, I decided to swim so as not to disturb the couple again. In the summer, the waters of Touma Beach are very calm, so it was easy.

On the northern side of Zamami, Otake and Nakadake are the two hills marked on Google Maps. While we could not find our way to Otake, Nakadake was instead doable.

We also visited Chishi observation deck (it has bathroom and drinking water source), but the views were far inferior to Kuromae Cape! The Sun set and we returned to Zamami Town for a “night out”.

Even though the village is small, there are so many small streets that one can get a bit lost and suddenly come across really nice food places.

I can’t remember where we ate, but we did spend a couple of hours eating delicious BBQ chicken and drinking Orion beer inside a big top tent where a few locals laughed endlessly at our broken Japanese, and then moved on to an open-air bar that was playing Bob Marley. 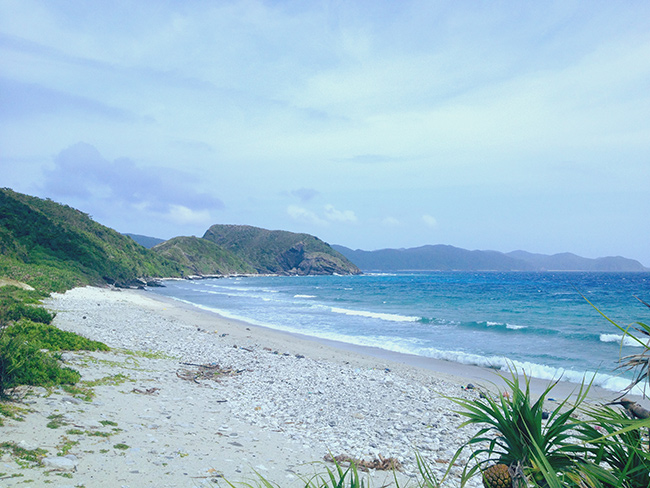 South-west from the Chishi observatory one finds Yuhina beach, easily accessible yet almost deserted as well.

An old couple had their tent up, and they were delighted to strike up a conversation. They had been there for more than a week by the time we met.

She played the ukelele and he played the flute, and they were probably the happiest traveling souls to ever set foot on Zamami island.

After some swimming, I walked along the shore until I found the perfect reading spot atop a big rock. I took out “The Old Man and the Sea”. I ignored Hemmingway’s description of Santiago and instead imagined the old man from the tent to be the hero of my book.

Following the western cliffs along the island, there are two observatories. We hiked to them with other travellers from the hostel, and enjoyed a beautiful sunset from there.

Between them, the trail has a small bifurcation that leads to Nita beach. When I was there, the path was rather challening, and some parts required climbing skills. Or maybe I took the wrong path and there is an easier one.

Nita is another of the deserted beaches of the island where one can enjoy uninterrupted nature sights and sounds for days on end.

For our last night, we chose to sleep at Ama beach’s camping. Reasonably priced tent rentals are available.

However, Zamami in July gets extremely hot and full of mosquitoes, so one has to make a choice: shut the tent from the inside to keep the insects outside and die of heat, or leave it open and die of a thousand mosquito bites.

I could stand neither, so I took my towel and a beer and made for the beach, to sleep on it.

If you don’t mind the small crabs that constantly pop up out of the sand around the vicinity of your body, then Ama beach is a good place to sleep.

As I finished my beer and prepared to sleep under the stars, I heard someone softly yelling “Spanish! Spanish!” from the bushes.

I quickly pieced things together and realized it was the old couple again.

This time, they wanted me to know the truth. They were not actually Japanese. They confessed to me he and she were actually from Mars and Alpha Cassiopea, respectively.

Additionally, he was a Hawaiian marihuana dealer turned stone artist and she was a fashion designer, so their relationship was a trippy and picturesque one; their life together was as improvised and meaningful and meaningless as they wished it to be.

They just moved on and around, their bones now tired after a thousand adventures.

We discussed the turning of the tides, and the Japanese traditions and beliefs behind them. We discussed traveling and twisted accents, polygamies and monogamies, long-gone emperors and their obsessions with the power of the words. She reminded me of Bishop Myriel.

Finally, the man produced a kite and there we were, the three of us trying to fly it under the full moon, failing miserably.

As the night grew windier, we parted ways. They faded away and disappeared into an eternal bliss shrouded in reflected moonlight.

The Moon stayed with me, white and massive, keeping her opinions to herself.

Bishop Myriel said that “to travel is to be born and to die at every instant” while comparing the shifting horizon and our human existence. I took that thought with me into my dreams that night. Traveling exposes you to so many new things, that a person is never the same after a journey. Every second you are exposed to different realities challenges everything you think you know.

I agreed with my interpretation of Myriel’s words and fell asleep.