Odaru waterfall is the largest of the seven “Kawazu Waterfalls” found at the heart of the Izu Peninsula in Shizuoka, Japan. And right next to the plunge, there is the mixed Amagiso Onsen. Maybe the coolest onsen in the country?

Accessible all year round, a swim in the chilly river waters followed by a warm bath at the hot springs makes the perfect offbeat weekend getaway from Tokyo.

The entrance fee for those who only wish to use the onsen facilities is 2,000 JPY. These facilities are the waterfall onsens (a few mixed hot spring pools), as well as the underground onsen (see below), the Amagiiwa public bath, and the male/female private indoor baths.

Take the elevator down to the first floor, and you will find the private onsen areas. You can leave most of your stuff in these lockers. The only rule of the outdoor mixed onsen is that one must wear a swimsuit. You can also take your camera and anything else you need to the hot springs outside.

After that, follow the signs for the waterfall until the exit, and walk the 300m that separate the building from the hot springs. There is also a mixed “changing” room by the hot springs where you can leave your towels and any other belongings.

And then, you’re there! There are a few pools in different shapes from where to contemplate the waterfalls, some covered and some unsheltered.

The best way to proceed is to first have a swim in the Kawazu river, and then jump into the heated waters. It’s even better in winter, when the experience is all the more refreshing.

This and other waterfalls in the region were formed when a volcano named Noboriominami erupted about 25,000 years ago.

Noboriominami and hundreds of other small volcanoes of the Izu Tobu group are responsible for the rock formations by the rivers, cliffs and beaches of the region; that which makes the Izu Peninsula such a beautiful and unique seaside destination. 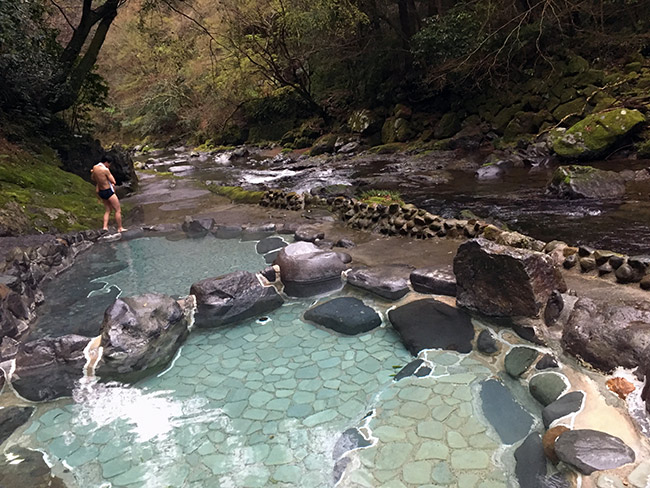 A nice surprise for people who didn’t plan much like me: Amagiso Onsen has a 30-meter-long underground passage of hot water. Although a bit claustrophobic, it is indeed a very interesting and fun idea.

The water covers half of the height of the passage, a bit over the waist. The whole place is quiet and peaceful, and it’s easy to breath and relaxed with your friends or lovers.

Or you can just chill on your own, alone, literally inside the mountain. Just you and the echo of your voice.

The hot springs and the ryokan

This place was definitely the highlight of my visit to southern Shizuoka, despite the impressive beaches and rock formations found along its coasts.

We went in March (the famous Kawazu Sakura bloom as early as Feb 20th, so the leaves were already green), and there were only six other visitors in the springs. We sat in the hot waters, gave each other a massage, and lost ourselves in the hypnotizing sound of the dropping water. It even rained for quite a while, but that made it all the more exceptional and refreshing. 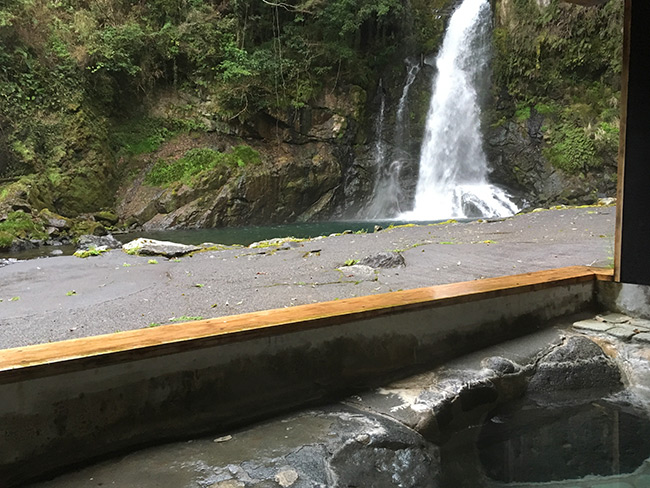 What with the unexpected outdoor pools inside the private baths, private rock baths, and many other smaller pools in other places along the river outside, it really feels like there are still some secret pools awaiting those who solve the labyrinth.

There’s a bunch of stuff to do before or after the waterfall onsen: the seven waterfall hiking trail, a visit to Hirizo Beach, the Ichibu ricefields, the delicious sushi restaurants of Kawazu, and many many more sights along the scenic ocean road. All in all, a perfect weekend trip to find some peace in central Japan.


Disclosure on affiliate links: This article contains affiliate links. If you make a purchase or a booking through them, I receive a comission at no extra cost to you. This comission helps me keep this site up and running.

2 Replies to “Waterfall onsen in Shizuoka”