— Hey, Trung! Nice to see you again, mate. Listen, I’ve been to the-
— The flower festival! -he cut me-. I know! I’ve seen you on Facebook!
— What?
— Yeah, you arrived yesterday and your face is all over Facebook in this town, bro -he laughed.

Finding out about the festival

I first met Trung on the bus to Bac Son from Hanoi. He was the most proficient English speaker of his friends, and the one I ended up chatting most with during the ride. Since Bac Son is not really on the backpacker trail, they were curious about my choice of destination.

He told me I came to Bac Son at the right time, because a flower festival was taking place a few villages away. Trung insisted that it was a really cool event and that I definitely had to go. He was too busy to take me there, but he would try to attend for a while at the end of the next day at least.

The next day, I woke up early to climb the Nà Lay peak and see the sunrise over the valley. At the top, I found a tent. A man from Bac Ninh called Quoc had camped there to make sure he wouldn’t miss the sunrise. “It’s the best hotel in Bac Son, up here, alone, with these!” he said as he pointed to the views. 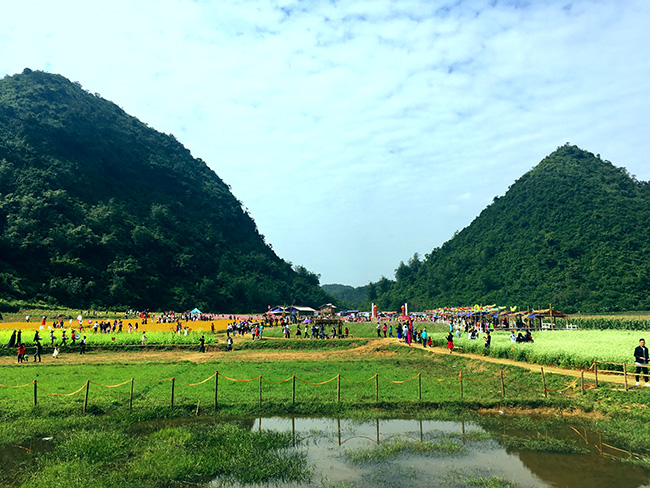 How to get to the festival

After the sunrise, we climbed down, rented a motorbike, and rode eastbound following the river. We didn’t exactly know where the festival was, but after about 20 minutes on the DT243 provincial road, we noticed a crowd jamming the road. “I guess it’s here!”

The place is accessed through a bottleneck passage that quickly creates a horrible and dusty traffic jam with cars, bikes and even buses trying to go both ways. Try to get there by bicycle or bike, if you can. Definitely avoid the car option because you might be stuck for hours. 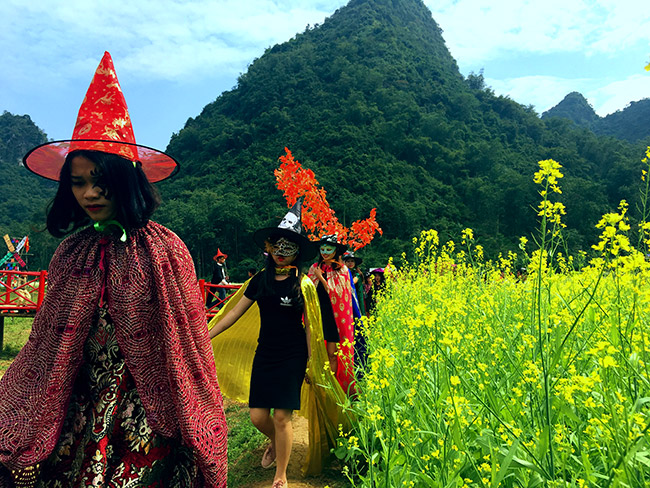 The main thing are the colorful fields of flowers of the botanical garden. There are different patches with flowers of different colors, which makes the place really beautiful. A red bridge crosses over a shallow pond located at the center.

There is an area with Halloween-themed decorations: big pumpkins, ghosts, etc. And then, the coolest part in my opinion: there are pieces of art spread around the big garden (a mill, a wall with a window, bamboo structures, etc).

You will also find food stands at the entrance, and resting barracks by the eastern end of the fields. Narrow paths lead you everywhere across the fields and from art piece to art piece. 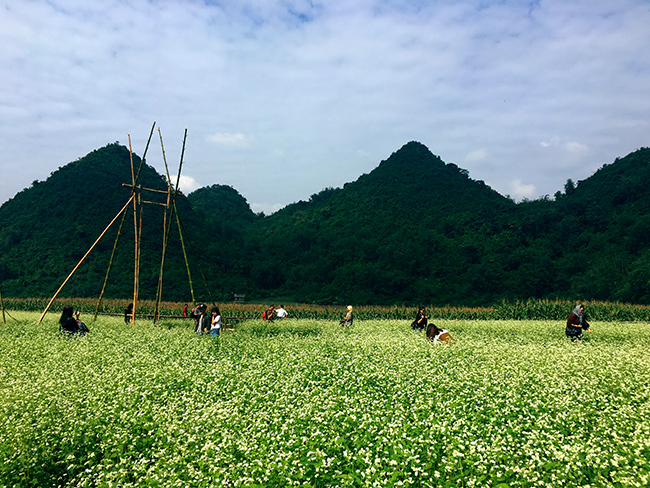 The fifteen minutes of fame

I was the only foreigner-looking person out of the 500 people gathered there, so I inevitably ended up getting a lot of attention.

Because now it’s all about selfies, I could see the picture that the person is taking. Then I noticed something new from my previous similar experiences in Asia: the Vietnamese locals were using Snapchat instead.

That means that while holding the phone to take a selfie, they would browse through the different animals effects and place different types of animal features on my face. I found that funny

Then, I started noticing they were also adding effects to make us look better. I found that slightly tragic, though I obviously didn’t mind and just joked along.

Later on, I realized that half a dozen villagers had put up my face on their Facebook profile pictures. I noticed one put my face in the middle of the picture, and cropped herself out of it!

After Trung told me about it, I added a comment on a couple of those pictures, and that led to another half dozen villagers putting up my profile picture up! 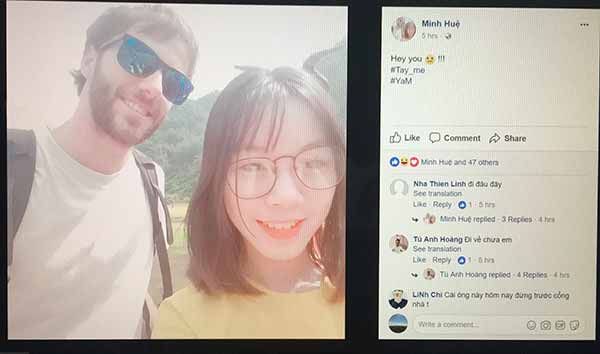 What else to do in Bac Son

The best thing to do around here is to get a motorbike or a bicycle and ride up and down the river through the valley and its beautiful fields. You can also explore the old Quynh Son village, and climb the Nà Lay peak for the amazing views.

Finally, the next thing to do is continue your journey (preferrably on a motorbike) in either direction from Bac Son, visiting the little settlements and rice fields, and allowing yourself to be amazed at the beauty of it all. 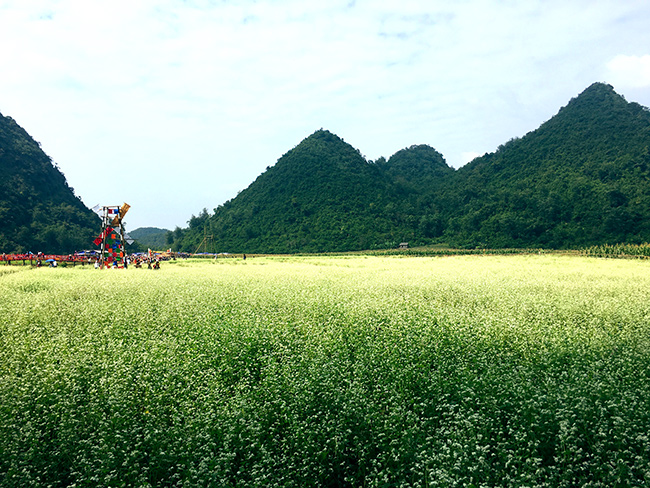