I landed in Vietnam with no plans but a few disperse pins on the map. On my very first night in Hanoi, I met a kind traveller who told me to go north. “You have to see the Ban Gioc waterfalls”, she said. “Don’t check it on Google! Just go! Trust me.” Another traveler agreed. “The north! You must go north! Leave Hanoi and go north!”

So I took out a map, I marked the waterfalls on it, and I packed my bag two mornings later, direction: north. How? National route 1B.

The first province I was to cross was Lang Son, with a town called Bac Son on the way. Bac Son would be the first of many beautiful places that make the northern countryside of Vietnam one of the most beautiful places on Earth. From there, it just got more and more beautiful as I rode north and westward. 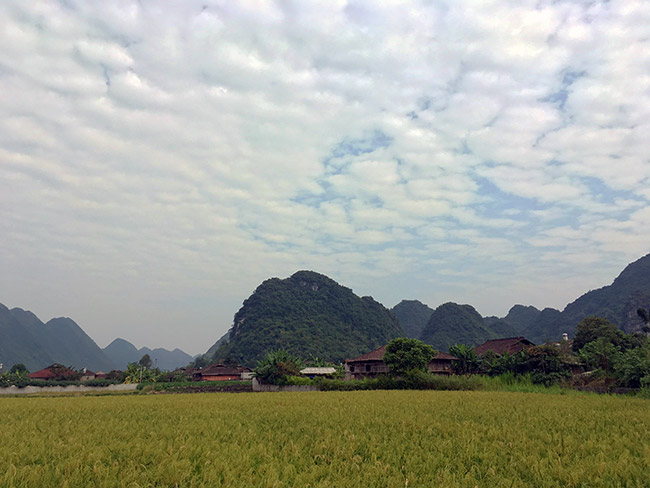 How to get to Bac Son

North-bound buses leave Hanoi from (at least) My Dinh station (Bến xe khách Mỹ Đình), which is located quite west from the city center (21.028329,105.7771). There are many local buses to My Dinh from Old Quarter.

Getting there was supposed to be easy, but I misread the destination of the first bus I got on. The ticket collector told me right after charging me the fee, so I decided to enjoy a bit of a joy ride since I had already paid for it… A bus tour, one transfer, and two bowls of beef pho later, I reached My Dinh and jumped on the first bus going north.

In Vietnam, or at least in the north, bus stations have a static board with all bus schedules and fares. Note that some locals might not know about some buses, and also some buses are not on the board. The bus from My Dinh to Bac Son costs 75,000 VND (2.7 EUR). 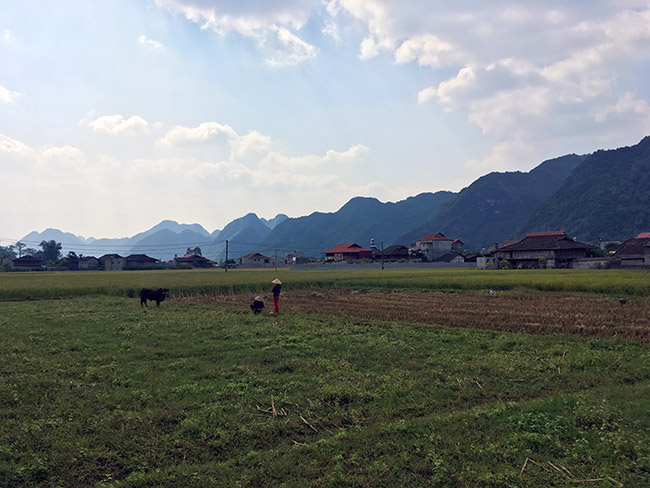 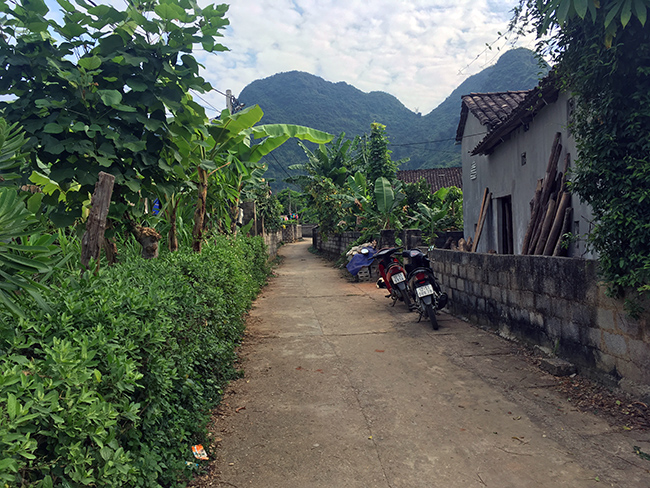 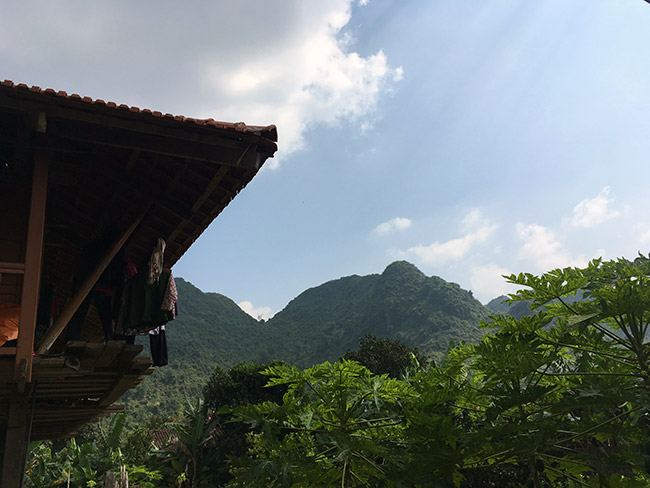 The old village of Bac Son

As I stepped out of the bus in Bac Son I was dropped on the main road of Bac Son, more specifically the new town. Momentarily frustrated, I quickly shot my maps app and realized this row of newly built houses only took a small portion of the valley.

A local helped me reach Homestay Bac Son, my accommodation for the next days. On the way to the homestay I noticed we were leaving behind the town and venturing into the fields along a path that crossed a river and reached the northern side of the valley’s bottom. We came to the old village, also known as Quynh Son.

The homestay was a wooden house with a stone kitchen, a beautiful and cozy home for travellers. I quickly discussed the price with the young manager of the business and proceeded to drop my luggage and set out. I was so happy to get started, to begin exploring the region.

Bac Son is a valley of green fields drenched on golden sunlight from sunrise to sunset, year-round. A silver river and a laidback town of field workers complete the picture. A beautiful place, there to be looked at, somewhat timeless and indifferent to the modernization happening downtown.

I was quickly attracted to the sights of this town, and soon found myself adrift in its humble labyrinth of small streets, homes, laboring villagers and dogs. Every dead end was different: a pond, a farm, a cemetery, even a temple.

After losing myself for a few hours, I decided to climb the nearby Nà Lay hill and see it all from above. 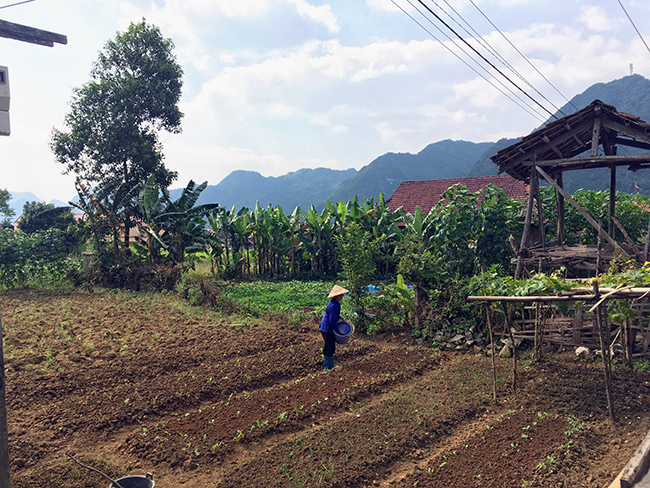 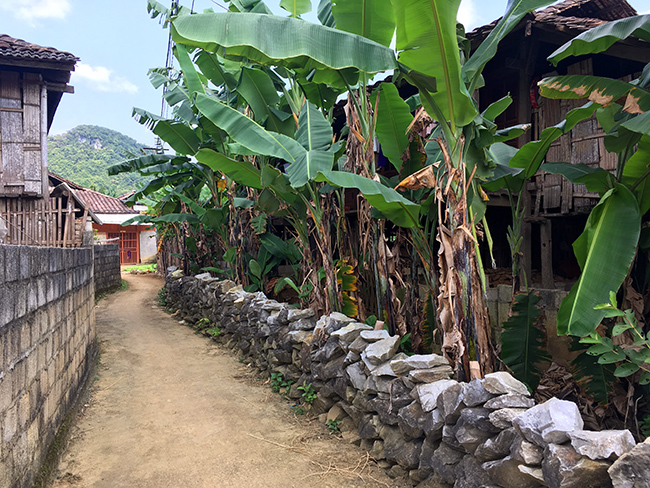 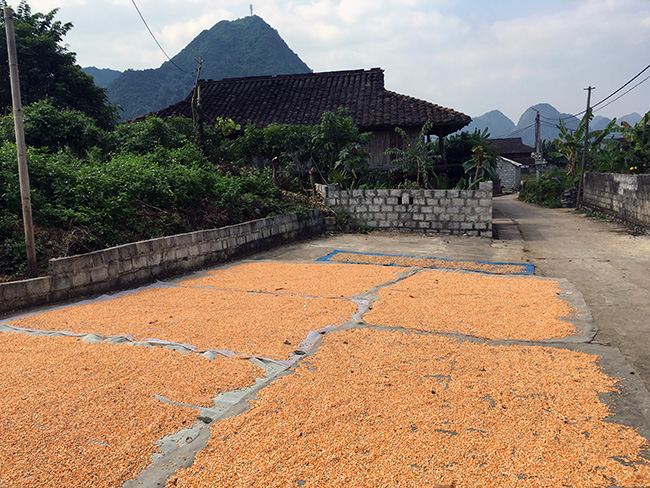 Traditional houses in northern Vietnam are built on stilts. That is, the main structure is raised on piles over the surface of the soil.

The materials are anything strong enough found in the tropical forests: wood, bamboo, rattan, cane, etc.

All Quynh Son houses seem to be produced using the same pattern. The ground floor is used for parking of vehicles, storage of tools or raising cattle. Sometimes it’s just empty. Since the ground floor captures cold air for longer times than the first floor, some families have a place for chilling there as well.

Household life takes place upstairs, on the first floor. Accessed by a single set of stairs on the street-side of the house, the wooden-walled first floor is usually extended with balconies and terraces.

The foundation piles pierce through the first floor and then become the columns that divide the space into squares and rectangles. Curtains are then employed to complete the bedchambers. Finally, colorful carpets cover most of the floor, decorating the orange wooden walls. 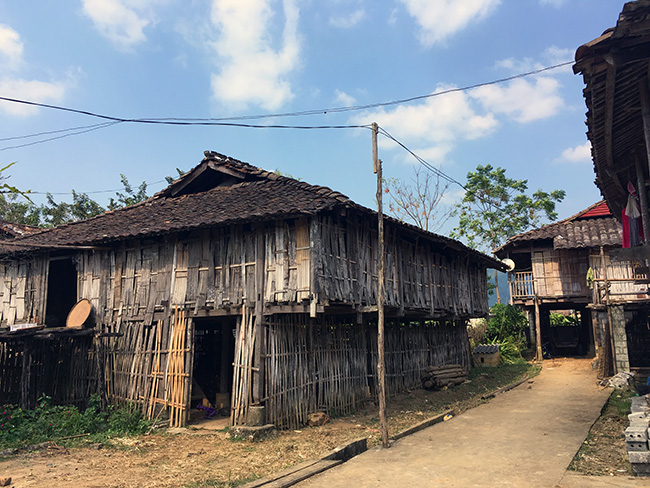 Although some houses are completely built using wood, a lot of families opted for stone-based kitchens and bathrooms.

The coolest home in the village used the platform at the top of the stairs for drying the grain, and that’s also where the watchdog stayed all day, stately looking after the house.

Although I first came across this architecture in Vietnam, I later realized this type of ethnic houses can be found in many other regions of south-east and east Asia. It makes sense because a lot of ethnicities in this part of the world have shared or intersecting origins. 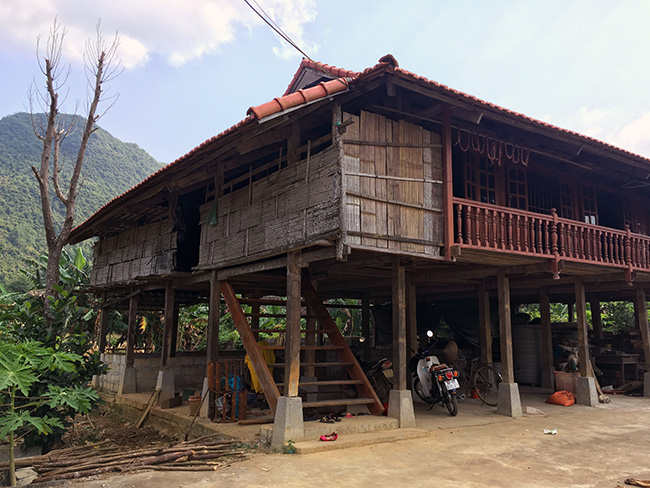 Mingling with the villagers

One way to get mixed in the local community was through the owner of the homestay, who obviously knew everyone.

The old town villagers would gather every day at the volleyball court. Volleyball seems to be a very popular sport everywhere in Vietnam. I wonder if France brought it along when it occupied the place back in the 19th century, but the Vietnamese people I asked did not seem to know about that, and neither did Google.

Most of them spend the day working the fields. I loved walking around the fields. The golden green vastness was only interrupted by farmers’ conical hats made of straw and the occasional helping bull. Boys and girls shadowed their elders while trying to learn the millenary craft.

The perfect postcard scenery is nowadays slightly ruined by the electricity poles and cables, but that’s what makes night volleyball games possible!

Some villagers also found time to fish in the river. And some other took care of different kinds of livestock. Our neighbour had a bunch of cute pigs squealing around all day long.

Finally, what was left of the day as the Sun labored into the twilight was spent socializing by the road. DT241 is a country side road that separates Quynh Son and the fields. There, one can find a few basic convenience stores and some sort of bars where locals gather to catch up. 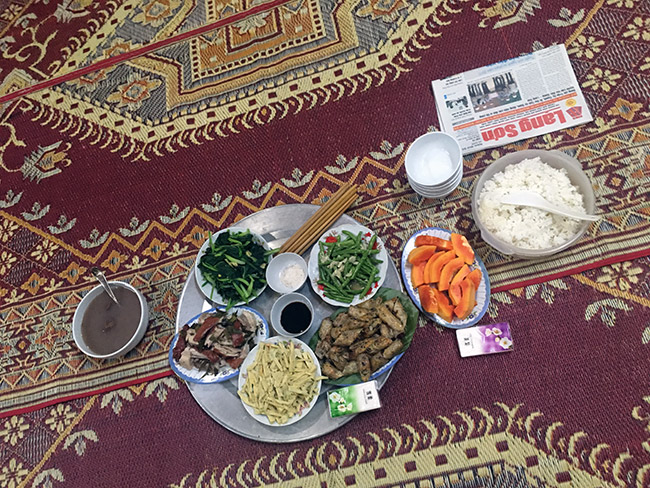